Recently, the ALLEA permanent working group on Intellectual Property Rights (IPR) elaborated a new supplementary statement on the topic on open access. The Working Group has devoted much attention to this topic in the past two years, having published a Statement on Enhancement of Open Access to Scientific Publications in Europe in Europe as well as a Follow-up Statement on open access. After taking recent laws in the Netherlands and Germany into consideration, the working group has formulated the supplementary statement that can be accessed via the link below. 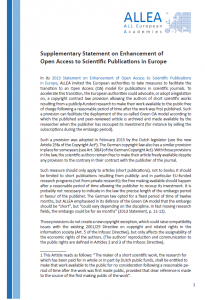 In its 2013 Statement on Enhancement of Open Access to Scientific Publications in Europe, ALLEA invited the European authorities to take measures to facilitate the transition to an Open Access (OA) model for publications in scientific journals. In their supplementary statement, the authors now encourage the European authorities to “advocate, or adopt a legislation on a copyright contract law provision allowing the authors of short scientific works resulting from a publicly-funded research to make their work available to the public free of charge following a reasonable period of time after the work was first published.” Thereby, the statement specifies, the deployment of the so-called Green OA model can be facilitated.

Both the Netherlands and Germany recently have adopted such provisions that give the scientific authors the right to make their article freely available despite any provision to the contrary in their contract with the publisher of the journal.

In the statement, the Working Group suggests that such authors’ rights should apply to articles, and not to books: “[I]t should be limited to short publications resulting from publicly- and in particular EU-funded research programs (not from private research); the free making available should happen after a reasonable period of time allowing the publisher to recoup its investment.”

Those provisions “do not create a new copyright exception […] but only affect the assignability of the economic rights of the authors”. This supplementary statement encourages European institutions concerned with the dissemination of scientific research to consider similar measures which could be adopted at European or national level and to devote more attention to the awareness of author rights in open access models. 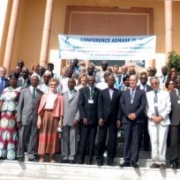 The second African European Mediterranean Academies for Science Education (AEMASE) Conference (AEMASE) was held in Dakar, Senegal from the 12th to the 13th of October 2015 with the kind hospitality of the Académie des Sciences et Téchniques du Sénégal (ANSTS). ALLEA participated in the Conference via its Working Group on Science Education.

AEMASE is an intercontinental initiative of science academies in the geographical African-European-Mediterranean (AEM) area, a region that shares strong and ancient political and scientific links. At the origin of the idea of AEMASE lies the strong desire of several national Academies to help improve formal and informal science education (SE) as part of their mission. The partner institutions involved in this initiative are the French, Italian, Moroccan and Senegalese national Academies and the Egyptian Bibliotheca Alexandrina.

The same AEMASE partner institutions, which organised the 1st AEMASE Conference at the Accademia Nazionale dei Lincei in Rome in May 2014, have decided to hold alternating conferences in Europe and Africa. The second AEMASE Conference in October 2015 was therefore the logical continuation of the Rome Conference.

The Conference was made possible thanks to the generous support of IAP, the ANSTS, the Accademia Nazionale dei Lincei, the Académie des Sciences, the Hassan II Academie des Sciences et Technologie of Morocco, and ALLEA. 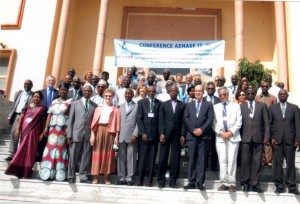 The Conference was concluded in the afternoon of October 13th, when a full report on the Conference was prepared by the chairs, the moderators and the session reporters via a conclusive session in which the future of the AEMASE concept was discussed.
The Conference ended with the participants’ unanimous approval of the Dakar Declaration, which called on all countries in the AEM region to urgently implement and consolidate IBSE/STEM/SBC Education programmes and on Academies and Ministries of Education to re-elaborate science education programmes to include new ways of teaching and learning.