Among the manifold activities aimed at improving STEM education, the ALLEA Working Group on Science Education is currently working on the preparation of the third AEMASE Conference, which is intended to take place in the second half of 2017.

The ALLEA Working Group on Science Education, chaired by Professor Giancarlo Vecchio, has over the last years put great effort in promoting the cooperation between academies in the AEM (African, European and Mediterranean) region.
Amongst the activities of the informal AEMASE network (African-European-Mediterranean Academies for Science Education), which aims to improve science education in schools in the AEM area, it has organized two intercontinental conferences during the past years: the AEMASE I Conference, hosted by the Accademia Nazionale dei Lincei in Rome in 2014, and the AEMASE II Conference, held in the premises of the Académie Nationale des Sciences et Techniques du Sénégal in Dakar in 2015. 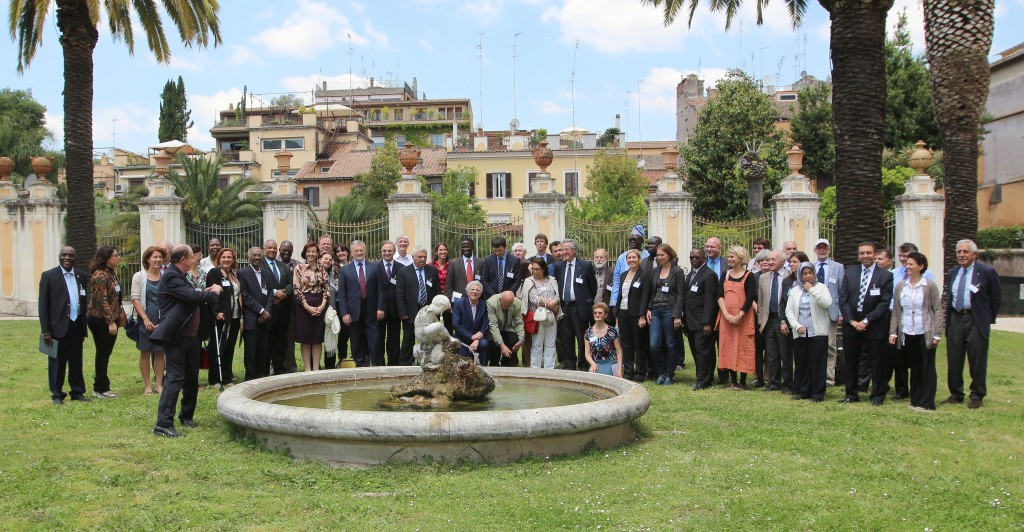 During both conferences, participants from various continents shared their experiences and best practices developed in their countries to reform science education focusing on the novel pedagogical approach IBSE (Inquiry-Based Science Education). On the occasion of the AEMASE II Conference delegates of European and African academies signed the Dakar Declaration calling for a sound cooperation among Academies, Ministries of Education, the African Union, the European Commission, UNESCO and foundations for the renewal of science education at the intercontinental African-European level.

For the AEMASE III conference, the Maltese Government has been approached with an invitation to host the event on the Mediterranean island. A preliminary response signalled a keen interest. Subsequent discussions on a final agreement and concrete arrangements for date and venue of the conference are currently underway.
The conference will again provide a unique opportunity to bring together an international audience of scientists and researchers, science education experts and teachers trainers, policy-makers and politicians, representatives of funding agencies and foundations and to provide a platform to discuss the challenges for the future of science education, to stress the importance and benefits resulting from its reform in Africa and Europe and to promote AEMASE projects in the field of teachers´ professional development.

A Scientific Committee for the conference is currently being formed, co-chaired by Odile Macchi, member of the Académie des Sciences in France, and Norbert Hounkonnou, President of the Benin National Academy of Sciences, Arts and Letters, and including a number of further representatives from African and European academies, renowned scientists from Malta as well as the Presidents of the academy networks ALLEA and NASAC (Network of African Science Academies).

In its first meeting since the 2016 General Assembly, the ALLEA Board came together in Minsk on 20/21 June, on the kind invitation of the National Academy of Sciences of Belarus, to discuss ongoing ALLEA business and to lay the groundwork for the impending start of the SAPEA project in autumn.

On the first day of the meeting, the members of the Board were welcomed by the President of the Belarusian Academy, Academician Vladimir Gusakov, who expressed his deep gratitude for ALLEA’s interest in the science system of his country and highlighted how membership in ALLEA has led to many fruitful cooperation agreements with other academies across Europe. The NASB has been a member of ALLEA since its foundation in 1994

The following meeting saw for the first time the participation and accreditation of the newly elected Board Members Hubert Bocken of the Royal Flemish Academy of Belgium for Sciences and the Arts, Brigitte Mazohl of the Austrian Academy of Sciences and of Krista Varantola of the Council of Finnish Academies. 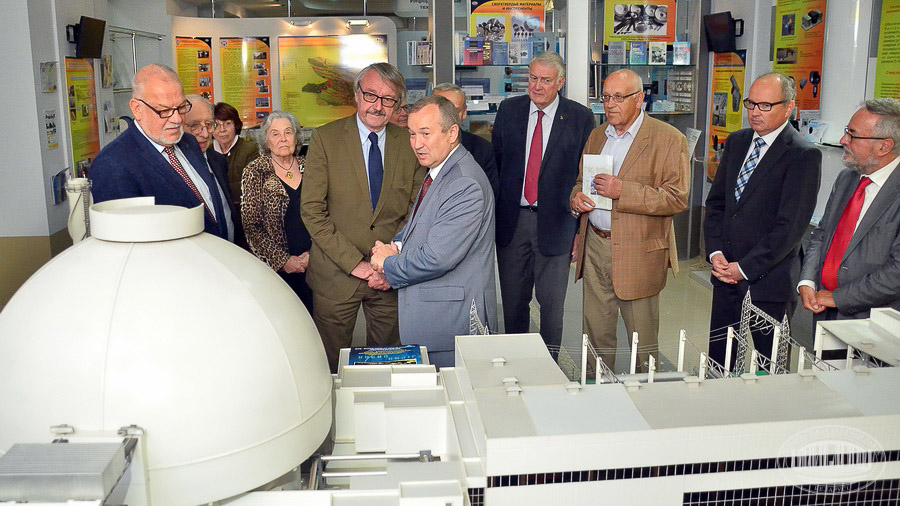 The focus of the meeting on the first day was on the implementation of issues which were agreed upon during the ALLEA General Assembly in Vienna as well as other recent, on-going and future activities of ALLEA and partners.

The second day of the meeting primarily dealt with ALLEA’s role in the SAPEA project, in which ALLEA as a consortium partner together with Academia Europaea, EASAC, Euro-CASE and FEAM will be providing science advice to policy makers in the European Commission. As such, possible avenues for ALLEA member academies to get involved in the project were discussed and followed-up from the General Assembly.

The meeting was concluded with an exquisite cultural programme organized by the National Academy of Sciences of Belarus and discussions on ways to foster cooperation between NASB and sister academies in Europe under the umbrella of ALLEA.

The ALLEA Board was accompanied during its visit by NASB Chief Scientific Secretary Alexander Kilchevski and the Head of the Department for International Cooperation, Vladimir Podkopaev.

The National Academy of Sciences of Belarus (NAS of Belarus, or NASB) is the highest
state scientific organization of the Republic of Belarus, which carries out the organization and
coordination of fundamental and applied research performed by all subjects of scientific
activities, provides fundamental and applied research and developments in the main directions of
natural, engineering, social sciences, the humanities and arts with the purpose of obtaining new
knowledge about human, society, nature and artificial objects and increasing the scientific and
technical, intellectual and spiritual potential of the Republic of Belarus. The National Academy
of Sciences carries out the organization, conduction and coordination of the state of scientific
expertise, pursues common state policy, coordination and state regulation of activities of
organizations in the exploration and use of outer space for peaceful purposes, serves as an
umbrella organization of Belarus on scientific and methodological support of informatisation
development, and also carries out some functions of a republican body of state management in
the field of science

For pictures and a report (in English) of the meeting by the National Academy of Sciences of Belarus please click here.

The Union of the German Academies of Sciences and Humanities currently coordinates  the project “Elaboration of a Concept for a European Academies Internet Gateway for the Social Sciences and Humanities (AGATE)”, conducted in close collaboration with ALLEA. The workshop’s objective was to share experiences and know-how, identify common chances and challenges of the proposed AGATE, and to pinpoint synergies and possibilities for future collaboration (click here for the workshop programme). 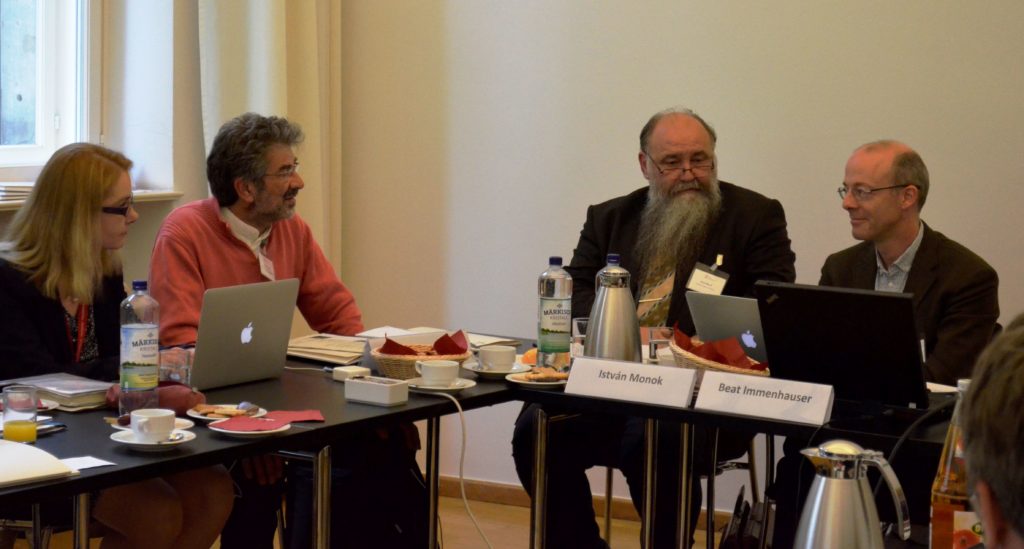 The workshop opened with a session dedicated to the “Status Quo of digital Research Practices and Publications at the European Academies today”.
Several representatives of European academies gave insights into the challenges the digitisation process is posing to their academies’ SSH-projects, available solutions and desiderata. There was agreement that the long-term perspective and relevance of this research output creates particular requirements regarding the sustainability of digital

research methods and publication practices. Against this background, the AGATE initiative is considered a welcome opportunity to exchange knowledge and highlight best practices amongst the European academies to develop a joint digital agenda that ensures the leading position of the academies’ SSH research during the digital turn.

In the afternoon session four experts discussed fundamental aspects of the proposed AGATE with the workshop participants, amongst them representatives of the European Infrastructures DARIAH, CLARIAH(NL)/CLARIN, Europeana, and OpenAire. The participants agreed that AGATE has to be more than a technical solution. Its relevance lies equally in the support of digital research practices and network-building amongst the academies. Therefore, the second workshop which will take place on 16 January 2017 at the BBAW, will focus on practical information concerning digital research and publication practices, such as standards and good practices, legal issues, and other relevant topics. It will be aimed at researchers, ICT and digital library experts, and other interested parties from European Academies. Suggestions can be conveyed either to the scientific coordinator of the project, Dr Ulrike Wuttke (wuttke@akademienunion-berlin.de), or directly to the ALLEA Berlin office (secretariat@allea.org).

On 12 June, the Academy of Sciences of Moldova celebrated two major events in its history. It has been 55 years since the academy was officially founded and even 70 years since the establishment of  the first research institute. To commemorate these dates, the academy put together an impressive programme, showcasing the variety of Moldovan science and folklore.
ALLEA President Günter Stock was warmly invited to participate in the festivities, but due to conflicting appointment was unable to go. Instead he sent a video message which you can find below.

Following a request by the European Commission, the ALLEA Permanent Working Group on Science and Ethics, chaired by Professor Göran Hermerén, has taken on the responsibility of updating the “European Code of Conduct for Research Integrity”. For this endeavor, a subgroup was formed, comprising experts from Belgium, Finland, Hungary, Ireland, the Netherlands, Sweden, and Switzerland. The group is chaired by Dr Maura Hiney from the Royal Irish Academy, who also chairs Science Europe’s Working Group on Research Integrity.

First published in 2011 in cooperation with the European Science Foundation (ESF), the first edition of this document addressed the principles of research integrity, good research practices and potential forms of misconduct in scientific and scholarly research. The Code was well received and is widely used within the research community across Europe.

Recently, the European Commission expressed a keen interest in an updated version of the Code which is intended to become the standard reference document for EU-funded research projects. Since the first publication, new developments such as self-plagiarism, reproducibility of research results and challenges arising in the context of Open Science, among others, have evolved and will be taken into account in the revision of the Code.

At the meeting, ALLEA President Professor Günter Stock welcomed the members of the subgroup and the attending guests and highlighted the value and importance of ALLEA’s Permanent Working Group on Science and Ethics’ work in general and the efforts in updating the Code in particular. He considered it an exceptional opportunity for ALLEA to continue framing the conditions for science and scholarship in Europe, thereby demonstrating the capacities and strength of the academies in Europe in providing policy-for-science advice to policy-makers through their European network ALLEA.

In this first meeting, the participants shared their vision on the nature and objectives of the Code in light of the challenges arising from new developments in the research enterprise as well as in society. They identified the main issues to be revised and updated in the document and agreed on the procedures and timeline of the revision process.

The participants shared the understanding of the Code as an empowering document for scientists and scholars, which should be universally applicable and should aim to promote a culture of integrity and good research practice.

Relevant stakeholders and experts outside the academies will be involved in the revision through a two-stage consultation process. The detailed discussions with Mr Isidoros Karatzas from the European Commission and Dr Torkild Vinther from ENRIO represented a first step in this direction. Further relevant external stakeholder organisations have been invited to signpost issues that they feel should be considered in an updated Code of Conduct. In a second stage, stakeholders will be encouraged to comment on an advanced draft of the document.

A revised version of the European Code of Conduct for Research Integrity is envisaged to be finalised in early 2017.

https://allea.org/wp-content/uploads/2015/07/news-banner.jpg 255 409 alleaadmin https://allea.org/wp-content/uploads/2019/04/allealogo-1-300x83.png alleaadmin2016-06-10 13:30:092019-06-26 22:33:12ALLEA Permanent Working Group on Science & Ethics met in Berlin to revise of European Code of Conduct for Research Integrity
Scroll to top
This site uses cookies to offer you a better browsing experience. To find out more on how we use cookies and how you can change your settings click on More info. AcceptDeclineMore info