At their latest meeting, ALLEA’s Permanent Working Group Science & Ethics convened to discuss contributions to the important and ongoing debates around Open Access publishing in Europe following the publication of Plan S among other pertinent issues concerning research ethics and integrity. 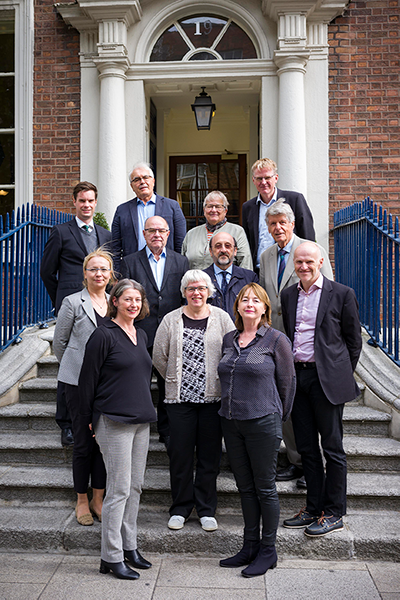 Members of the Permanent Working Group Science and Ethics at the Royal Irish Academy in Dublin. Credit: RIA

Expertly and generously hosted by the Royal Irish Academy, the meeting took place on 19 September at the academy’s premises in Dublin.

The expert group discussed the ethical implications of the Plan S, which was released on 4 September by 11 national research funding organisations, the so-called “coalition S” and endorsed by the European Commissioner for Research, Science and Innovation, Carlos Moedas, and the European Research Council. The proposal aims to make scientific publications funded by the coalition and through the EU’s Framework Programmes available immediately in Open Access from 2020 onwards. ALLEA is working on an initial response to the proposal.

In addition, the group discussed additional topics, which could become the focus of their inquiry in the future. Among them are the regular update of the European Code of Conduct and the dissemination of the currently available translated versions (LINK). Future topics may also include the ethics of research evaluation or ethical challenges in public-private research partnerships.

What is Plan S?

At its core, Plan S is made up of one target and 10 accompanying principles. 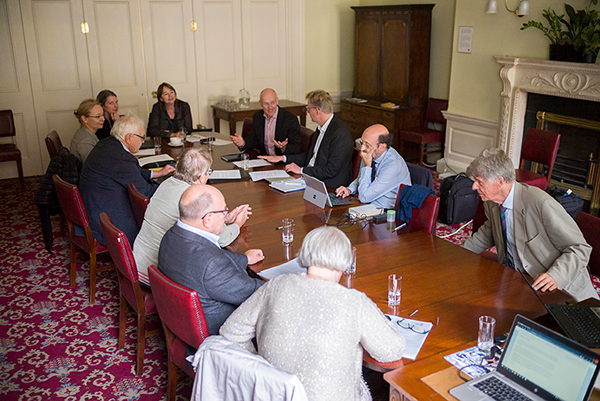 Next year will mark the 25th anniversary of ALLEA, and we will celebrate the occasion with our Member Academies at the 2019 General Assembly, which will be hosted by the Swiss Academies of Arts and Sciences on 8-10 May 2019.

As in all jubilees, there should be room for pride and celebration, but also for appraisal and critique. Under the theme “Science and Society in Present-Day Europe,” ALLEA Member Academies will look at past achievements with a contemporary perspective, in order to prepare a better future.

As public confidence in the guiding role of science in shaping our future seems to be increasingly called into question, the ALLEA 2019 General Assembly will provide a platform for ALLEA Member Academies to ponder on these issues, and devise effective strategies to overcome them. What role can European academies play to bridge the gap between the production and the diffusion of knowledge within society? How can they contribute their share to the anchoring of the underlying values of the Enlightenment upon which scientific progress is based?

About the ALLEA General Assembly

ALLEA and its Member Academies will delve into these questions during our annual General Assembly in Bern on 8-10 May 2019. The event includes the annual closed meeting of European academies of sciences and humanities, the award ceremony of the All European Academies Madame de Staël Prize for Cultural Values and the symposium “Science and Society in Present-Day Europe”.

At the closed business meeting on 8 May, ALLEA governance and policy matters are on the agenda and discussed by ALLEA Member Academies. In the evening, the opening of the conference will take place with a commemoration of the 25 years of ALLEA and the award ceremony of the Madame de Staël Prize for Cultural Values.

The symposium will bring together European policymakers, scientists, scholars as well as the interested public to debate the most pressing issues faced by science and society on 9 May 2019. The one-day symposium will seek to debate the role of academies in present-day Europe and look at past achievements with the eyes of the present, in order to prepare a better future.

The event is completed with a cultural programme on 10 May 2019. The Swiss Academies of Arts and Sciences will invite participants of the conference to a day-trip to visit the scientific facilities of Basel.

Previous editions of the General Assembly 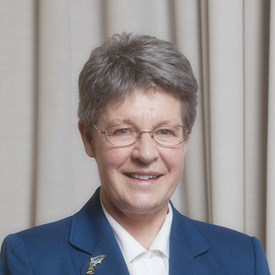 Dame Jocelyn Bell-Burnell, Astrophysics professor at the University of Oxford and former President of the ALLEA Member Academy Royal Society of Edinburgh, has been awarded the Breakthrough Prize in Fundamental Physics in recognition of her discovery of radio pulsars, widely considered to be one of the greatest astronomical discoveries of the twentieth century. The prize also acknowledges Dame Jocelyn’s inspiring scientific leadership over the last five decades.

The award comes five decades after Jocelyn Bell-Burnell made the discovery of the pulsar back in 1967. Dame Jocelyn has announced that she will donate the $3 million prize to the Institute of Physics, in order to fund graduate students from under-represented groups who wish to engage in physics research.

Dame Jocelyn will be recognised at the 2019 Breakthrough Prize ceremony on Sunday, November 4, 2018, at NASA’s Ames Research Center in California, United States.

About the Breakthrough Prize

The Breakthrough Prize, known as the world’s largest science prize, recognises the world’s top scientists with a prize of US$3 million, and is presented in the fields of Life Sciences, Fundamental Physics and Mathematics. Previous recipients of the award include Stephen Hawking, seven CERN scientists attributed the discovery of the Higgs boson, and the LIGO collaboration that detected gravitational waves.

ALLEA is a partner of the Breakthrough Prize since 2017 and has sought to increase awareness of the opportunity to nominate great scientists and mathematicians on our website and other communication channels. We share the common goal of promoting a culture where science and scholarship can thrive, and where scientists who significantly contribute to our collective understanding of the world should be recognised.

The development of more strategic methods and channels for science communication are needed if we wish our investments in scientific expertise and research to have a bigger social impact. To that end, ALLEA has partnered with Wissenschaft im Dialog to prepare the panel discussion “Communicating science in a complex world: Experiences, Controversies and Future Strategies.”

In the panel discussion, representatives from European networks of science communication, academies, research organisations, EU institutions and industry will discuss and exchange strategies, experiences and innovative ideas for science communication. Participants are expected to develop approaches for a more strategic and effective communication of research topics by analysing previous successes and failures from a wide range of fields.

The panel will take place on 17 October 2018 in Brussels from 18:00 to 19:30, with a networking cocktail served afterwards. This event is free of charge, but registration is required; if you are interested in participating, please register here.

Public-opinion and perceptions of science and expertise are heavily influenced by old and new forms of media communication. The ALLEA workshop “Trust in Science and Changing Landscapes of Communication” shed light on the ways in which public trust in scientific institutions, evidence and advice is being challenged by new social and technological transformations. 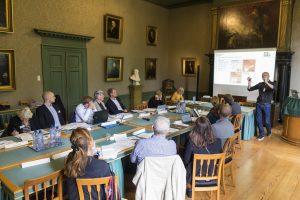 On 31 August 2018, the Royal Netherlands Academy of Arts and Sciences (KNAW) hosted the ALLEA workshop “Trust in Science & Changing Landscapes of Communication.” Chaired by former KNAW President Prof. José van Dijck, the workshop sought to improve our collective understanding on how changing landscapes of communication – brought about by advances in information technology, the media, and a number of socio-technical and political-economic transformations – have altered the way in which scientists communicate empirical and theoretical findings, and the way the public perceives and engages with research and academia.

Overall, trust in science seems to remain relatively high, but might be undermined by an increasing loss of trust in, and trustworthiness of, traditional media, accompanied by a growing importance of social media platforms. The workshop also looked at some of the criticism that has been raised towards researchers and the scientific community’s alleged lack of willingness and/or competence to communicate the results to the public in a differentiated way, adjusting to and engaging with new online communication tools. 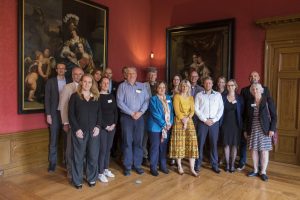 Renown scholars and researchers from the fields of Science and Communication, Media Studies, Philosophy, Psychology and Political Theory discussed various aspects from a wide range of perspectives. The discussions were divided into five sessions:

This was the third workshop led by the ALLEA Working Group Truth, Trust and Expertise, which extensively discusses issues regarding trust in science and expertise through a series of events and publications. A discussion paper summarising the outcomes of this workshop and other discussions held within the Working Group will be published in the upcoming months. You may read our first discussion paper here.

The ALLEA Board elected Professor Hubert Bocken (Royal Flemish Academy of Belgium for Science and the Arts), Professor Graham Caie (Royal Society of Edinburgh) and Professor Krista Varantola (Council of Finnish Academies) as the new Vice Presidents of the European Federation of Academies of Sciences and Humanities until 2020. The decision was taken during the first face to face meeting of the newly elected ALLEA Board in Berlin on 6 September 2018.

The Vice Presidents will work closely with the ALLEA President Antonio Loprieno, who assumed his position during the General Assembly in Sofia at the Bulgarian Academy of Sciences on 17 May 2018. The current ALLEA Board was elected on this occasion as well.

ALLEA Vice President Hubert Bocken is honorary President of the Royal Flemish Academy of Belgium for Science and the Arts. Educated in law at Ghent University and the Harvard Law School, Professor Bocken taught law of obligations, comparative law and environmental law at Ghent University, where he also served as member of the Board of the University, as Dean of the Faculty of Law, and as Chair of its foreign relations committee. He presently is co-chair of the Commission for the revision of Belgian Tort Law established by the Belgian Minister of Justice. Since 2016 he is part of the ALLEA Board and was reelected in 2018.

ALLEA Vice President Graham Caie CBE is Emeritus Professor and Professorial Research Fellow in English Language and Linguistics at the University of Glasgow, where he previously served as Vice Principal. His research interests include Old and Middle  English language and literature, the history of the English language, Scots language, and interdisciplinary medieval studies. He is Fellow and former Vice President of the Royal Society of Edinburgh, and he was Vice Chair of the Board of the National Library of Scotland, where he remains as Deputy Chair. He is on the Advisory Board of the British Council, Scotland, and on the Court (governing body) of Queen Margaret University, Edinburgh. Since 2014 he is part of the ALLEA Board and was reelected in 2018. He is also member of the ALLEA Working Group Horizon Europe.

ALLEA Vice President Krista Varantola is member of the Council of Finnish Academies and of the Finnish Academy of Science and Letters. She is Professor and Rector Emerita of the University of Tampere in Finland. Her academic field is English linguistics. She is currently Chair of the University Board of the University of Jyväskylä in Finland. Varantola has a long-standing interest in research integrity. She chairs the National Board on Research Integrity in Finland and is member of the ALLEA Permanent Working Group on Science & Ethics. She was one of the drafting group members of the 2017 revised edition of The European Code of Conduct for Research Integrity. She also acts in an advisory role for research integrity in a number EU funded research projects. Since 2016 she is part of the ALLEA Board and was reelected in 2018.