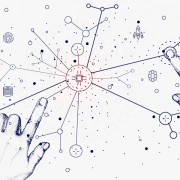 The ALLEA/Royal Society Discussion Paper ‘Flourishing in a data-enabled society’ examines how a European approach to data governance can unlock the full potential of data-based technologies, while at the same time safeguarding European values. 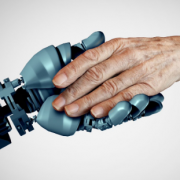 A new SAPEA report looks into the future of ageing. It reviews the best evidence available and assesses how different public policy options might help EU countries to achieve inclusive, fair and sustainable health and social care in the future. 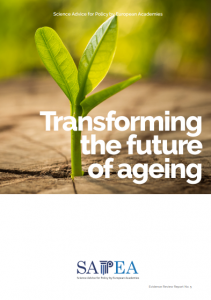 Society must tackle the challenges presented by ageing in every generation – not leave them until old age. This is the key conclusion of a major new Evidence Review Report entitled Transforming the Future of Ageing, published today by SAPEA.

The report is destined for the desks of the new European Commissioners expected to take office later in 2019. It reviews the best evidence on what public policies might help EU countries to achieve inclusive, fair and sustainable health and social care in the future.

The authors, leading scientists nominated by academies across Europe, conclude that the ageing process needs to be transformed – and that the best way to improve life outcomes in old age is to anticipate and tackle them in youth and middle age.

Among the report’s other headline conclusions are:
• Ageing in the future will take place in a very different context from the past and will be profoundly affected by phenomena such as climate change, air pollution and antibiotic resistance, as well as ongoing social changes. Policies will only be successful if they are able to accommodate these changes.
• Age-friendly communities enable older people to feel secure and to go about their daily life comfortably. Architects, urban planners, experts in mobility and ergonomics, social care experts and geriatricians must cooperate to make age-friendly communities the norm.
• Technology, including wearable and assistive devices and the advent of AI, is already changing the experience of ageing, and could transform it if barriers of acceptance and practicality can be overcome.

Further information and the report itself are available on SAPEA’s website. 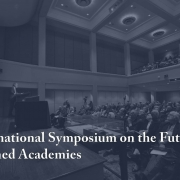 On 12-14 June 2019, the American Philosophical Society (APS) held the Public Keynote ‘International Symposium on the Future of Learned Academies’ as the closing event of its 275th anniversary celebration. ALLEA President Antonio Loprieno joined other renowned scholars from nearly 30 academies from around the world to discuss the major challenges and opportunities facing scientific institutions in the current political, economic, and social context. 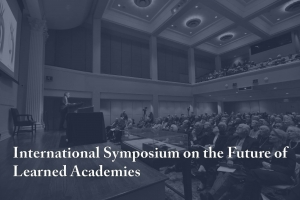 The symposium consisted of an International Keynote Panel held at the APS’ Franklin Hall on June 13 to highlight major challenges to the scholarly and scientific enterprise. The Panel was chaired by CEO of The New York Times Company, Mark Thompson, and the panellists included ALLEA President Antonio Loprieno, Ali Alpar from Bilim Akademisi  (Turkey), James Liao from Academia Sinica (Taiwan), Marcia McNutt from the National Academy of Sciences (United States), and Moneef Zou’bi from the Islamic World Academy of Sciences (Jordan).

Five different sessions about distinct aspects and components of Learned Academies today were led by the panellists on June 14, with Professor Loprieno leading session one on the issue of Academies’ Membership. You may see the full programme of the symposium here.

A livestream of the public keynote event on the evening of June 13 can be seen in full here. 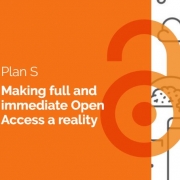 Plan S, the initiative to transition the scientific publishing system towards open access, was updated and postponed for a year. Its initiators, the cOAlition S, an international consortium of research funding organisations, have published a revision of its principles and implementation guidelines, taking onboard the feedback received by ALLEA and other stakeholder organisations. The update extends the envisaged starting date by one year until 2021. Affected researchers and scientific organisations will now have more time to adapt to the new open access policy requirements. 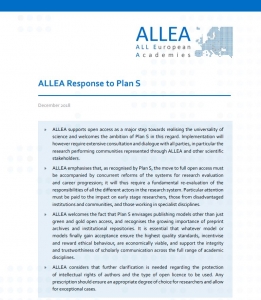 ALLEA supports open access as a major step towards realising the universality of science. In response to the first proposal of Plan S in 2018, the federation published an initial statement assessing key aspects that need to be taken into consideration in order to prevent unintended consequences in the scientific publishing sector and the research evaluation system. The revised version of the plan explicitly praises the work of ALLEA in this regard and calls for continued dialogue with the academic community.

According to cOAlition S, the revised Plan S maintains the fundamental principles:

But a number of important changes are proposed in the implementation guidance:

The summary was extracted from the cOAlition S rationale for the revisions.

Opening up the dialogue

In the beginning of this year, ALLEA also submitted recommendations to the consultation on the implementation guidelines. ALLEA President Antonio Loprieno met in Brussels with Robert-Jan Smits, Open Access Envoy of the European Commission, and Marc Schiltz, President of Science Europe, to discuss the next steps of Plan S.

Seeking to build a constructive dialogue within the research community on the future of Open Access, ALLEA has worked with its Member Academies to spur the debate on the topic. For instance, the Royal Irish Academy and the Royal Academy of Arts and Sciences of Barcelona have organised public events to promote a better understanding of the implications of Plan S for individual researchers, scientific organisations and publishers.

ALLEA’s President Antonio Loprieno participated in the summit organised by the Scottish Funding Council ‘Rising to the Challenges of a Post-Brexit World’ hosted by the Royal Society of Edinburgh on 30 May.

The event brought together Scotland’s college and university sectors to discuss how to address the challenges raised by the potential UK’s exit from the European Union. Participants included the Minister for Further Education, Higher Education and Science, Richard Lochhead, and Matt Lancashire, Director of Public and Policy Affairs at the Scottish Council for Development and Industry.

The debate revolved around two main questions: how to secure Scotland’s relationship with its European partners, and how to meet Scotland’s need for a skilled workforce in a post-Brexit environment.

“Political uncertainty can unintentionally lead to undermining long-standing research collaborations between international partners. European scientists must work together to protect and reinforce existing relationships among partners at all levels and ensure that close collaboration continues without disruptions,” said Loprieno.

Since the vote to leave the UK on 23 June 2016, ALLEA has worked closely with its member academies to raise awareness of the critical role of EU-UK scientific collaboration. In various statements and letters, the federation has called for greater clarity on the future relationship between EU and UK science policy and warned of the detrimental effects on the quality of scientific research and European citizens’ well-being on both sides of the English Channel.