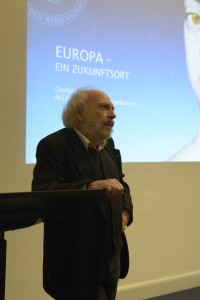 On 18 January 2014 the Berlin-Brandenburg Academy of Sciences and Humanities opened its doors for the Academy´s annual event highlight “Salon Sophie Charlotte” which attracted around 2000 guests. This year, under the Salon´s general heading “Europe – a place for the future” ALLEA for the first time presented its own programme with two presentations discussing the contributions of music in the process of European integration and its role for the European identity.

The ALLEA delegate of the Union of German Academies of Sciences and Humanities, Professor Albrecht Riethmüller guided through the ALLEA session and opened the stage with a presentation on “The Anthem of Europe”. Accompanied by musical examples, Riethmüller presented the different uses and interpretations of Beethovens “Ode to Joy” until becoming the official anthem of the European Union in an instrumental version after other proposals – such as an anthem sung in the universal language of Esperanto – were not convincing.

The presentation was followed by a lecture entitled “Beethoven 2020 in Europe” given by the Director of the Beethoven House in Bonn, Malte Boecker. Outlining the historical background in which Beethoven lived, Boecker investigated the dedication of the German composer to the European identity beyond the area of music and composition. 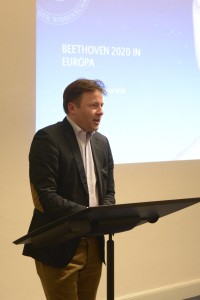 These contributions form part of a wider ALLEA initiative directed at tackling the growing lack of commitment and trust in Europe as a cultural and intellectual region in times of economic crisis. ALLEA therewith joins the debate on the future of Europe with a set of activities planned, such as workshops on pan-European issues at different member academies resulting in a book series which documents the results of the discussions and deliberations. For the topic “Music in European Integration” a workshop will take place at the Berlin-Brandenburg Academy of Sciences and Humanities in March 2014, bringing together an international group of musicologists to discuss musico-political questions as they relate to European Integration.

This year´s Salon Sophie Charlotte was oriented towards the Academy´s current topic of the year which throughout 2013 and 2014 addresses a multitude of issues and aspects around the theme “Future Place: Europe”. The Salon offered lectures, artistic performances, guided tours and cultural presentations from different perspectives all focusing on questions towards the future of Europe such as “What are Europe´s perspectives under consideration of the symptoms of the current crisis?”, “What is it that holds us together?” or “How strong do values such as freedom, social justice and democracy unify us?”

The Berlin-Brandenburg Academy of Sciences and Humanities established its “Topic of the Year” programme in 2007. It is committed to promoting the dialogue between science and society. Among its primary objectives is to inform the public about the Academy’s research projects and to encourage discussion and debate on most relevant issues on the interface of science and scholarship, arts and society.