On the occasion of the 15th ALLEA General Assembly, held on the premises of the Norwegian Academy of Science and Letters in Oslo, on 25 April 2014 the delegates of the ALLEA member academies decided to admit four further full members and one associate member to the European Federation of Academies of Sciences and Humanities. Furthermore, in the course of ALLEA´s annual meeting, all re-eligible members of the ALLEA Board were re-elected and one new member was elected for the period 2014-16. The meeting was preceded by a scientific symposium and a festive event celebrating ALLEA´s 20th anniversary. 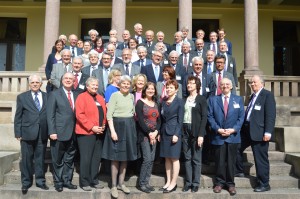 Participants of the annual ALLEA business meeting 2014 in Oslo

Since 25 April 2014 the European Federation of Academies of Sciences and Humanities counts 58 full members. On the recommendation of the ALLEA Board, the General Assembly voted for the admission of four academies that had applied for membership in ALLEA:  The Royal Academy of Sciences and Arts of Barcelona (Spain), The Institute for Catalan Studies (Spain), The Academy of Sciences of Turin (Italy) and The Venetian Institute for Sciences, Letters and the Arts (Italy). The Assembly furthermore decided to admit The Science Academy, Istanbul (Turkey), as associate member in ALLEA.

The agenda of the 15th ALLEA General Assembly also included the election of the ALLEA Board for the following two years. The Board comprises nine members including the President and two Vice Presidents whose term in office is independent from the one of the Board. All five re-eligible existing Board members were re-elected and the ALLEA delegates elected The Royal Society of Edinburgh, represented by its Vice President Professor Graham Caie, to fill the vacancy and become member of the Board. The  15th ALLEA General Assembly closed with an invitation from the President of the Academy of Sciences of Lisbon to hold the next annual meeting in the Portuguese capital on 23 and 24 April 2015. 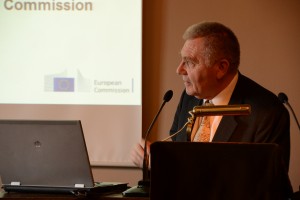 The annual business meeting of ALLEA was preceded by a scientific symposium dedicated to the topic “Enabling Early Career Researchers: Needs for Training of a New Generation” on the day prior to the meeting. The symposium included a keynote speech by the President of the European Research Council (ERC), Professor Jean-Pierre Bourguignon, on European efforts in supporting the career paths of early stage scientists and scholars.

Further presentations and panel discussions provided manifold perspectives on the issue, particularly detailing the Norwegian practise and strategy and displaying the views of early career researchers themselves. Professor Lauritz Broder Holm-Nielsen, Vice President of the European Universities Association (EUA), laid a special focus on the efforts of Universities in training early career researchers in Europe.

The symposium was followed by a festive event celebrating ALLEA´s 20th anniversary opened by a speech on “The role of academies in a European research and education area” by the President of ALLEA, Professor Günter Stock. Further highlights included a video address by the laureate of the All European Academies Madame de Staël Prize for Cultural Values 2014, Professor Luisa Passerini, elaborating on “Affective Narratives for Europe”, as well as a festive lecture by Professor Étienne François, Emeritus Professor of History in Paris and Berlin, discussing the question “Between National and Global: Europe as a Research Space”. 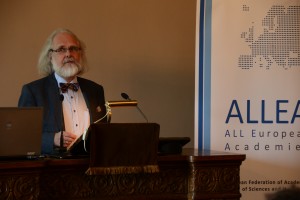 Welcome Address by Professor Nils Chr. Stenseth, President of the Norwegian Academy of Science and Letters

The audience was welcomed by Professor Nils Chr. Stenseth, President of the hosting Norwegian Academy of Science and Letters, and Dr Björn Haugstad, State Secretary in the Norwegian Ministry for Education and Research. Among the guests of the festive event were four past presidents of ALLEA as well as the Presidents of partner organisations in Europe: Professor Jos van der Meer, President of the European Academies Science Advisory Council (EASAC) and Professor Lars Walloe, President of  Academia Europaea.

Presentations and pictures of the symposium and festive event are made available here.
Please click for further information about The Norwegian Academy of Science and Letters. Download Press Release here