Blog - Latest News
You are here: Home / ALLEA co-organises debate on “Inequalities in Europe” at the European Par...

The event began with an introductory address by the ALLEA President, after which a panel of experts from both academia and the European Parliament discussed various aspects of the topic of inequalities and highlighted key examples. After the panel discussion, a debate ensued with members of the European Parliament which allowed for further examination of how science can help the development of policies for tackling inequalities. This multifaceted topic encompasses such issues as income and wealth inequalities; employment, inequality and social policy; as well as health, regional, educational, democratic, environmental, and gender inequalities and other cross-cutting themes such as migration, identity or sustainability. 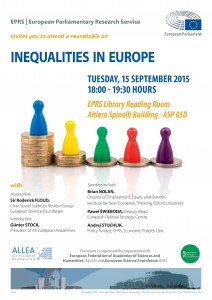 Inequalities are a profound research and policy challenge for the European Union. For example, the European Union’s 2020 Strategy includes a target to have at least 20 million fewer people in or at risk of poverty and social exclusion by 2020. The understanding of inequalities is also vital for many areas of research within Horizon 2020. To “reverse inequalities” is furthermore a named priority for the EU in the European Council’s “Strategic Agenda for the Union in Times of Change”.

More information will soon be available on the EPRS blog.

https://allea.org/wp-content/uploads/2019/04/allealogo-1-300x83.png 0 0 alleaadmin https://allea.org/wp-content/uploads/2019/04/allealogo-1-300x83.png alleaadmin2015-09-16 14:17:242019-06-26 22:33:14ALLEA co-organises debate on “Inequalities in Europe” at the European Parliament in Brussels
ALLEA participates in JRC initiative “Science Meets Parliaments” ALLEA participates in second AEMASE Conference in Senegal
Scroll to top
This site uses cookies to offer you a better browsing experience. To find out more on how we use cookies and how you can change your settings click on More info. AcceptDeclineMore info