On 15 September 2015 in Brussels, leading European scientists exchanged perspectives with members of the European Parliament with the aim of promoting evidence-informed policymaking. The event offered panel sessions on numerous aspects of this topic as well as networking opportunities and bilateral meetings between scientists and Parliamentarians. ALLEA was actively engaged at the event with the ALLEA President participating in a high-level panel session and several experts nominated by ALLEA taking part in the bilateral meetings. 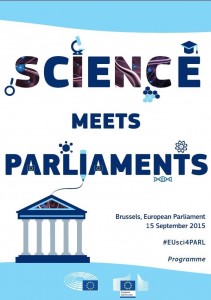 The opening session invited high-level panelists (including Commissioners Tibor Navracsics and Carlos Moedas as well as European Parliament Vice-President Mairead McGuiness and MEP Jerzy Buzek, who chairs the Committee on Industry, Research and Energy) to discuss what EU policymakers expect and need from scientists and how existing communication channels between the two communities can be improved. The panel was followed by a session on the collaboration between Parliamentarians and scientists on the national level.

ALLEA President Günter Stock took part in the next scheduled high-level panel focussing on the perspectives of scientific organisations in response to the expectations of EU and national policymakers. Other panelists included representatives from the fellow European academy organisations EASAC and Euro-CASE. The session was moderated by Vladimir Šucha, Director-General of the Joint Research Centre (JRC) and was followed by a wrap-up session as well as a presentation of the Science and Technology Options Assessment (STOA) MEP-Scientist Pairing Scheme 2015.

In the afternoon, two parallel sessions took place, the first being a panel on best practices of scientific advice at national level. The other session consisted of bilateral meetings between scientists and parliamentarians to further discuss how to strengthen the connection between scientific advice and informed policymaking. Several scientists nominated by ALLEA on behalf of its Member Academies were invited to take part in this session and discussed issues such as “Plant protection and biocides regulation” and “Circular economy and resource efficiency” in face-to-face meetings with MEPs.

“Science Meets Parliaments” was co-organised by the JRC and the Science and Technology Options Assessment (STOA) in an effort to promote evidence-informed policymaking. “It is important that EU policy-makers have a regular exchange with scientists allowing them to better understand scientists’ views on policy issues and vice versa,” stated STOA on its website.

https://allea.org/wp-content/uploads/2019/04/allealogo-1-300x83.png 0 0 alleaadmin https://allea.org/wp-content/uploads/2019/04/allealogo-1-300x83.png alleaadmin2015-09-16 14:06:082019-06-26 22:33:14ALLEA participates in JRC initiative “Science Meets Parliaments”
ALLEA Board meets at the Swiss Academies of Arts and Sciences ALLEA co-organises debate on “Inequalities in Europe” at the European Parliament...
Scroll to top
This site uses cookies to offer you a better browsing experience. To find out more on how we use cookies and how you can change your settings click on More info. AcceptDeclineMore info