ALLEA supports upholding the principles outlined in a joint statement on “Higher Education, Research and Innovation: After Triggering Article 50”, issued on 29 March 2017, by seven Academies from the British Isles, five of which are ALLEA Member Academies. ALLEA joins the academies in continuing to flag the importance of honouring existing research collaboration agreements for the duration of their course and to ensure the best possible conditions are in place for future collaboration between the EU and the UK. 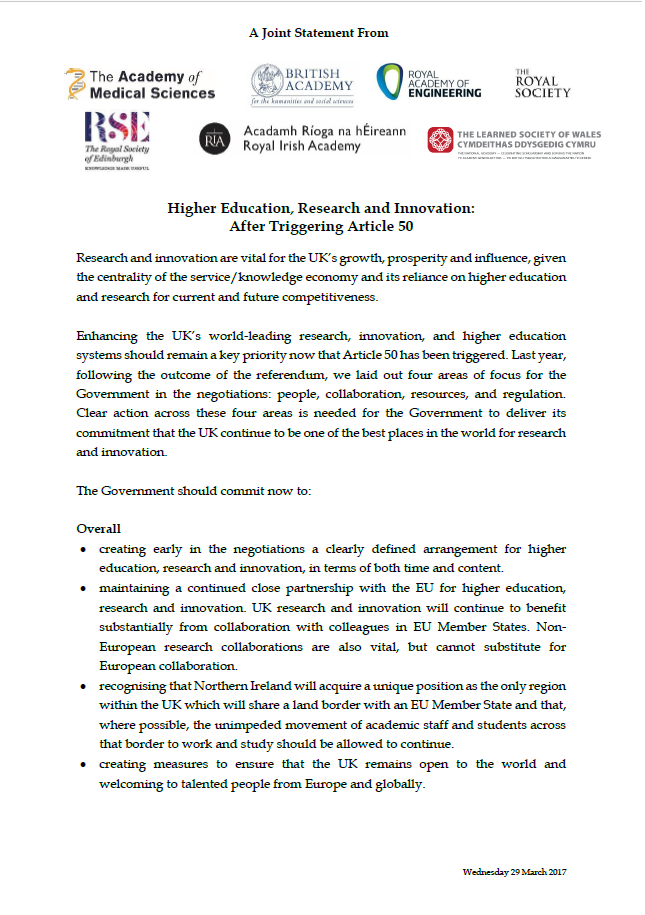 Joint statement on higher education, research and innovation by UK and Irish Academies, following the formal invocation of Article 50 by the UK Government

Research and innovation are vital for the UK’s growth, prosperity and influence, given the centrality of the service/knowledge economy and its reliance on higher education and research for current and future competitiveness.

Enhancing the UK’s world-leading research, innovation, and higher education systems should remain a key priority now that Article 50 has been triggered. Last year, following the outcome of the referendum, we laid out four areas of focus for the Government in the negotiations: people, collaboration, resources, and regulation. Clear action across these four areas is needed for the Government to deliver its commitment that the UK continue to be one of the best places in the world for research and innovation.

The Government should commit now to:

• creating early in the negotiations a clearly defined arrangement for higher education, research and innovation, in terms of both time and content.
• maintaining a continued close partnership with the EU for higher education, research and innovation. UK research and innovation will continue to benefit substantially from collaboration with colleagues in EU Member States. Non-European research collaborations are also vital, but cannot substitute for European collaboration.
• recognising that Northern Ireland will acquire a unique position as the only region within the UK which will share a land border with an EU Member State and that, where possible, the unimpeded movement of academic staff and students across that border to work and study should be allowed to continue.
• creating measures to ensure that the UK remains open to the world and welcoming to talented people from Europe and globally.

• safeguarding the ability of UK institutions to retain and readily employ EU innovation, research and higher education staff after the UK leaves the EU.
• providing a right to remain indefinitely to all EU staff and their dependants, employed in the UK at the time of the departure from the EU, in order to remain a competitive environment to recruit talented researchers.
• maintaining the opportunities UK nationals presently have to work in the EU because the UK benefits from them being able to work overseas to develop expertise and networks, and bring these back to the UK.
• providing measures to ensure that the UK remains open to the world and welcoming to talented students from Europe and globally, for instance extending the same assurances for EU students arriving in the UK for the academic years 2018-19 and 2019-20 as have been provided for those arriving in the current and next academic year in terms of eligibility for student finance throughout the duration of their courses, including taking up post-degree employment in the UK.

• continuing to participate fully in Erasmus+ and Horizon 2020, including the European Research Council and the Marie Skłodowska-Curie Actions, until their completion.
• gaining continued close association with European programmes in the knowledge that three of the UK’s top five research collaborators are EU Member States.
Resources
• demonstrating its ambition by setting a target of 3% of GDP for combined public and private R&D spending and take steps to deliver this by at least matching public investment to the OECD average of 0.67% of GDP invested into R&D.
• providing an environment and incentives that encourages greater private sector investment in the UK’s research and innovation base.

• preserving the mutual recognition of professional qualifications between the UK and EU Member States.
• preserving and building on regulatory and standards equivalence with the EU where appropriate.

The statement follows up on a first joint initiative of the seven academies in response to the Brexit vote in July 2016. The text can be found here.

ALLEA stands with the Central European University
Scroll to top
This site uses cookies to offer you a better browsing experience. To find out more on how we use cookies and how you can change your settings click on More info. AcceptDeclineMore info