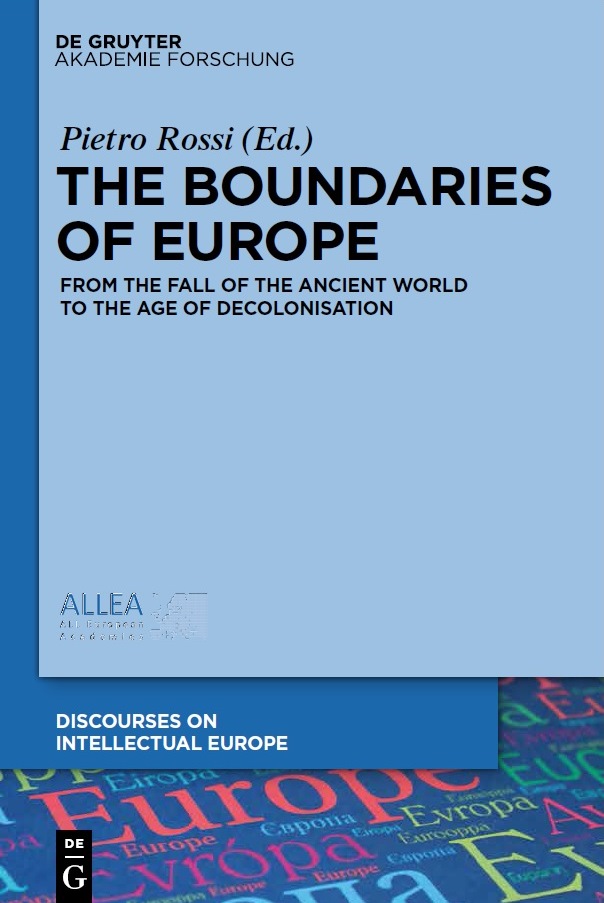 This April, ALLEA released the first volume in its new book series Discourses on Intellectual Europe, which seeks to explore the question of an intrinsic or quintessential European identity in the context of an integrated cultural and intellectual region. Edited by the Italian scholar Pietro Rossi, the essays in The Boundaries of Europe focus on how boundaries of various types have shaped and impacted our understanding of Europe.

Europe’s boundaries have mainly been shaped by cultural, religious, and political conceptions rather than by geography. This volume of bilingual essays from renowned European scholars outlines the transformation of Europe’s boundaries from the fall of the ancient world to the age of decolonisation, or the end of the explicit endeavour to “Europeanise” the earth.

From the decline of the Roman Empire to the polycentrism of today’s world, the essays span such aspects as the confrontation of Christian Europe with Islam and the changing role of the Mediterranean from “mare nostrum” to a frontier between nations. Scandinavia, Eastern Europe and the Atlantic are also analysed as boundaries in the context of exploration, migratory movements, cultural exchanges, and war. The Boundaries of Europe is edited by Pietro Rossi, Professor Emeritus of Philosophy of History at the University of Turin, member (and former President) of the Academy of Sciences of Turin, member of the National Academy of the Lincei and of Academia Europaea.

In times of crisis and rising scepticism towards the idea of European integration, the ALLEA book series Discourses on Intellectual Europe represents an effort from the scientific community in tackling these challenges for society’s commitment to Europe as an enduring cultural and intellectual region. Due to their long-standing tradition of preserving, securing and making available the cultural heritage of Europe, academies of sciences and humanities are in a special position to show and promote Europe’s deep-rooted intellectual and cultural richness.

This series of essay collections forms part of a wider set of ALLEA activities directed towards these objectives. The volumes are edited by eminent fellows of ALLEA member academies and appear in a bilingual format that seeks to underline Europe’s cultural diversity. Ultimately, the ALLEA book series seeks to explore the question of an intrinsic or quintessential European identity, its roots, and other crucial pan-European issues in an effort to contribute to the intellectual discourse that will shape Europe’s future.

Each ALLEA member academy will receive a gratis copy of this volume from the ALLEA secretariat.

Extra copies may be ordered from the publisher here.

https://allea.org/wp-content/uploads/2015/07/Book-Cover-final.jpg 903 604 alleaadmin https://allea.org/wp-content/uploads/2019/04/allealogo-1-300x83.png alleaadmin2015-05-18 15:54:482019-06-26 22:33:15The Boundaries of Europe - ALLEA releases first volume in essay series Discourses on Intellectual Europe
European Academy Organisations’ statement on President Juncker’s... SASSH Survey: ALLEA and the Union of the German Academies release extensive...
Scroll to top
This site uses cookies to offer you a better browsing experience. To find out more on how we use cookies and how you can change your settings click on More info. AcceptDeclineMore info