Blog - Latest News
You are here: Home / ALLEA Board meeting at the Bulgarian Academy of Sciences in Sofia

The Bulgarian Academy of Sciences

The ALLEA Board met in Sofia on the premises of the Bulgarian Academy of Sciences (BAS) from 16 – 17 September. At its third meeting of 2014, the Board discussed, inter alia, recent, current, and future ALLEA activities as well as on-going and planned future initiatives and projects by ALLEA´s five working groups. The meeting was facilitated by Professor Nikolay Miloshev, who is Vice President of the BAS and has represented his Academy in the ALLEA Board since 2013.

The programme opened with a session with Academy President Stefan Vodenicharov, who offered an overview of the many significant activities and services performed by the BAS. He underlined the importance of a reform process that the BAS-led research system underwent after the comprehensive scientific evaluation conducted by ALLEA and ESF in 2009 of the then 69 institutes, centres, laboratories, and other relevant facilities of the BAS. 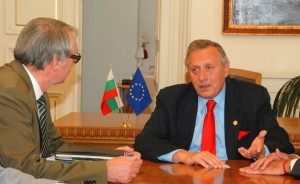 The ALLEA President pointed to the prominent role of the BAS in the Bulgarian science system as a whole and in the further strengthening of excellent research in the country against standards of international scientific competitiveness in particular. He also expressed his gratitude to President Vodenicharov for the close cooperation and long-standing engagement of the BAS in ALLEA activities.

Further to the reporting session on its recent activities, the ALLEA Board discussed the current personnel changes in Brussels as a result of the new composition of the European Commission under President-elect Jean-Claude Juncker and noted in particular the nomination of Commissioner-designate Carlos Moedas for the position of Commissioner for Research, Science and Innovation, which is of special interest to ALLEA and its science policy work. In reiterating ALLEA´s role as the voice of academies towards the European political institutions, the Board agreed on the necessity of sustaining the dialogue which was well-established with outgoing Commissioner Geoghegan-Quinn throughout the new term of Mr Moedas. 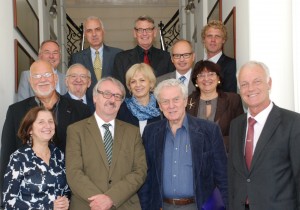 The ALLEA Board and representatives of BAS

The Board proceeded to devote a substantial portion of the meeting agenda to the planning of the General Assembly to be held at the Academy of Sciences of Lisbon in April 2015 as well as the next award ceremony for the All European Academies Madame de Staël Prize for Cultural Values. Updates were also provided regarding international partnerships with other academy networks and pan-European stakeholders as well as on the Survey and Synergy Analysis of SSH Research (SASSH) project, a joint undertaking by ALLEA and the Union of German Academies of Sciences and Humanities. The meeting was accompanied by a number of supplementary events, including a visit to the BAS-run archeological museum of Sofia. In closing the meeting, the Board looks forward to its next session in December at the Israel Academy of Sciences and Humanities in Jerusalem.

The Bulgarian Academy of Sciences (BAS) is the largest national centre for scientific research and the premiere research-performing organisation in Bulgaria. The BAS encompasses 42 autonomous research units (institutes) in 9 divisions which perform both fundamental and applied research in practically all fields of knowledge. It is accredited to tutor doctoral students in the areas of research conducted by the BAS institutes. The BAS generates 60% of Bulgaria’s internationally-recognised scientific output, such as publications in international scientific journals, projects, and patents. Read more about the BAS here.

Permanent Working Group on Science & Ethics meets at Royal Academy of Sciences...
Scroll to top
This site uses cookies to offer you a better browsing experience. To find out more on how we use cookies and how you can change your settings click on More info. AcceptDeclineMore info