Professor Guenter Stock receives honorary doctorate and delivers laureate speech on the role of science in shaping our future.

On 19 January 2016, ALLEA President Guenter Stock visited the Academy of Sciences of Moldova on the kind invitation of academy president Academician Gheorghe Duca in Chisinau. He was awarded an honorary doctorate by the academy for his substantial contribution to the promotion of scientific excellence and academic cooperation. 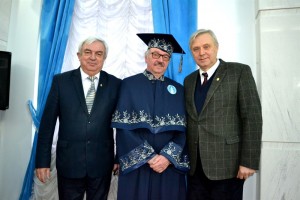 In his laureate speech Guenter Stock expressed deep gratitude and pride to receive this prestigious award. He reaffirmed ALLEA’s inclusive outlook on Europe, transcending the political boundaries of the EU and highlighted the importance of scientific autonomy and independence from political, ideological and commercial interference. Especially with a view towards the European Commission’s new Scientific Advice Mechanism and the role of the academies therein, the autonomy of the science community is now more important than ever in order to provide meaningful, unbiased and evidence-based policy advice. He reiterated the unique ability and responsibility of the scientific community “to spot problems earlier than the general public and politicians” and hence derived the duty to “make our fellow citizens, our politicians aware of what the future holds and how positive solutions could be found”.

A video recording of the speech can be found on the website of the Academy of Sciences of Moldova under this link and to view the picture gallery please click here.

In addition to his laureate speech at the academy, Professor Stock signed the Book of Honorable Guests at the Museum of the academy, and inter alia met with esteemed representatives of the Moldovan scientific and medical community. Professor Stock highly commended a draft concept published by the academy towards ensuring the proper conditions for the improvement of research performance and the creation of premises to attract talented youth in research. In his position as ALLEA President he reaffirmed his offer to support and assist where possible in achieving these laudable goals.

The Academy of Sciences of Moldova (A.S.M.) is the highest scientific forum of the state, and represents the only public institution of national interest in science and innovation sphere, it is a plenipotentiary coordinator of scientific and innovation activity. Also, it is a scientific consultant of the public authorities in the Republic of Moldova and has a Statute of Autonomy and acts on the basis of self-administration principles.