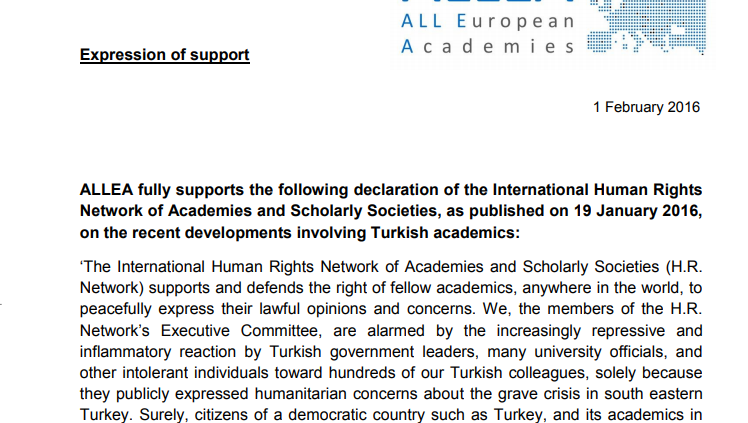 ALLEA fully supports the following declaration of the International Human Rights Network of Academies and Scholarly Societies, as published on 19 January 2016, on the recent developments involving Turkish academics:

‘The International Human Rights  Network of Academies and Scholarly Societies (H.R. Network) supports and defends the rights of fellow academics, anywhere in the world, to peacefully express their lawful opinions and concerns. We, the members of the H.R. Network’s Executive Committee, are alarmed by the increasingly repressive and inflammatory reaction by Turkish government leaders, many university officials, and other intolerant individuals toward hundreds of our Turkish colleagues, solely because they publicly expressed humanitarian concerns about the grave crisis in south eastern Turkey. Surely, citizens of a democratic country such as Turkey, and its academics in particular, have a civic duty to remind their government, when deemed necessary, of its obligations to respect Turkey’s constitution, adhere to humanitarian standards for all of its citizens, and give priority to peaceful solutions in crisis situations.

We condemn any threats, false accusations, and incitement to violence against our colleagues by the government of Turkey, which is obligated, under the Universal Declaration of Human Rights, to allow its citizens the “freedom to hold opinions without interference and to seek, receive and impart information and ideas through any media and regardless of frontiers.” In addition, we urge the government of Turkey to protect the rights of its citizens, to desist from threatening academics who are performing their civic duties by participating in governance, and to call its operatives to order – thereby discouraging hostile action against our colleagues.’

The original declaration of the International Human Rights Networks of Academies and Scholarly Societies can be accessed here.