The 2019 ALLEA General Assembly will be held on 8-10 May 2019 at the Swiss Academies of Arts and Sciences, located in Bern, Switzerland. On this occasion, ALLEA will also be celebrating its 25th Anniversary. 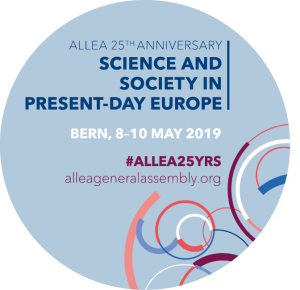 The ALLEA General Assembly convenes academies of sciences and humanities from 40 countries across the Council of Europe region. The General Assembly programme consists of various parts: the annual business meeting, the award ceremony of the All European Academies Madame de Staël Prize for Cultural Values, as well as a Scientific Symposium.

Under the theme Science and Society in Present-day Europe, leading academics, policy-makers and civil society representatives will reflect on the future of European science and the role of academies as bridges between the production and diffusion of knowledge for the benefit of society.

ALLEA will celebrate its 25th anniversary in the opening of the 2019 General Assembly with a special address on the role of academies in European societies by ALLEA President Antonio Loprieno at the University of Bern. On this occasion, Director-General for Research and Innovation Jean-Eric Paquet will deliver a keynote to commemorate 25 years of European academies’ cooperation and reflect on the future of European research.

The ALLEA Madame de Staël Prize for Cultural Values is annually awarded to an eminent scholars and intellectual whose work represents a significant contribution to the cultural values of Europe and to the idea of European integration, thereby promoting and strengthening an understanding of Europe as multifaceted, intellectual, open and vibrant.

This year’s laureate is economist Mariana Mazzucato, Professor of Economics of Innovation and Public Value at University College London (UCL), and Founder and Director of the UCL Institute for Innovation & Public Purpose (IIPP). Switzerland’s Federal Councillor for Economy, Education and Research Guy Parmelin will be opening the ceremony, and the President of the European Research Council Jean-Pierre Bourguignon will provide the laudatory speech.

Public confidence in the guiding role of science in shaping our future seems to be increasingly called into question. Does European science blossom, while European societies ache? Political discourse is frequently driven by algorithms of acceptance rather than by scientific or scholarly expertise. Our common cultural values, rooted in the curiosity and tolerance of the Enlightenment, are increasingly challenged.What role can European academies play to provide a bridge between production and diffusion of knowledge to and with society? The scientific symposium Science and Society in Present-day Europe will discuss these and other issues through four dedicated sessions on Science Policy, Early Career Researchers’ Perspective, Science in Society, and Science Advice.

Speakers will include Jean-Pierre Bourguignon, President of the European Research Council ERC; Madeleine Herren-Oesch, Director of  the Institute for European Global Studies, University of Basel; and Lesley Wilson, Secretary General of the European University Association (EUA).

Berne Scientifique: Guided scientific tour through the city of Bern

Throughout the years, Bern has proven to be a scientifically important city. Even Albert Einstein got the inspiration for his revolutionary theory of relativity in this very place. You will explore this place from an unconventional perspective. So, let us stroll through the alleys of this mesmerising and historic city and enjoy dinner in a surprising location.

Visit to Basel: One-day trip to the scientific and cultural facilities of Basel

The trip to Basel will start with a visit of the unique architecture of the Novartis campus, composed by architectural masterpieces by Marco Serra, David Chipperfield and Frank Gehry. The excursion continues with a guided tour of the Novartis campus’ laboratories, a walk around the historic centre of Basel and a tour of the Swiss Tropical and Public Health Institute, where an aperitif will be provided. The visit to Basel will incur a cost of €50 to cover all transportation, meals and entrance fees.

About the General Assembly 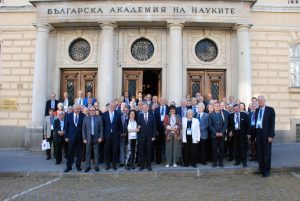 Representatives of ALLEA Member Academies during the 2018 General Assembly hosted at the Bulgarian Academy of Sciences in Sofia.

The ALLEA General Assembly is the annual meeting of ALLEA Member Academies. It convenes Academies of Sciences and Humanities from 40 countries across the Council of Europe region. The General Assembly programme consists of various parts: scientific symposia, the award ceremony of the All European Academies Madame de Staël Prize for Cultural Values, as well as the annual business meeting.

The symposium seeks to provide a platform for connecting excellence in Europe by bringing together high-ranking European policymakers, scientists, scholars as well as the interested public to debate on the most pressing issues faced by science and research.

The ALLEA Madame de Staël Prize for Cultural Values is awarded to eminent scholars whose work represents a significant contribution to the cultural and intellectual values of Europe and to the idea of European integration.

At the closed business meeting, ALLEA governance and policy matters are discussed by the ALLEA Board and representatives from the ALLEA Member Academies.

About the Swiss Academies of Arts and Sciences 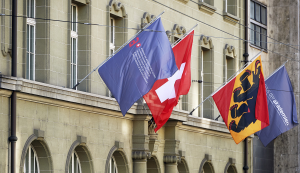 The academies engage themselves specifically for an equitable dialogue between science and society, and they advise politics and society in science-based issues that are socially relevant. They represent sciences across institutions and disciplines. Established in the scientific community, they have access to expertise and excellence and can therefore contribute specific knowledge to important political questions.

About the 2018 General Assembly