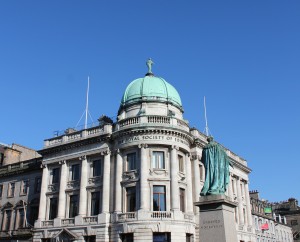 The Royal Society of Edinburgh

The ALLEA Board met in Edinburgh on the premises of the Royal Society of Edinburgh (RSE) from 29-30 June. At its second meeting of 2015, the Board discussed, inter alia, recent, current, and future ALLEA activities with a focus on the challenges and opportunities related to ALLEA’s involvement in the new Scientific Advice Mechanism of the European Commission (SAM). The meeting was facilitated by Professor Dame Jocelyn Bell Burnell, President of the RSE.

Before commencing the meeting, the attendees were welcomed by RSE President Dame Jocelyn Bell Burnell.  The meeting then opened with a session which focussed on reports regarding recent and ongoing ALLEA activities, highlighting in particular the recent release of numerous new ALLEA publications in addition to several in-progress initiatives at European level, including those related to the European Commission’s recently announced Scientific Advice Mechanism (SAM). Status updates respective to the ALLEA Working Groups were also reported and discussed.

The meeting continued with a reflective session on the results of the ALLEA General Assembly which took place in Lisbon in April, especially questions and ideas which may represent new opportunities for ALLEA both internally and externally. The agenda then proceeded to look ahead to plans regarding the next ALLEA General Assembly, which will be held in Vienna on 18/19 April 2016, as well as the next Madame de Staël Prize for Cultural Values. 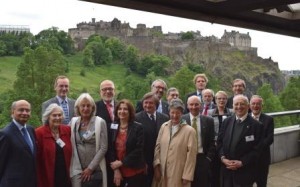 A highlight of the meeting took place on the evening of 29 June at a reception hosted by the RSE. A presentation on the many significant international engagements of the RSE was given by Professor Tariq Durrani OBE FRSE, Vice President for International Activities. ALLEA President Günter Stock also gave a short presentation on the activities and mission of ALLEA, with a particular focus on the academies’ and ALLEA’s role in the science policy advice arena in Europe. Guests included members of the Consular Corps in Edinburgh and Leith, the RSE Council, the RSE International Committee, as well as ALLEA Board Members and partners. Renowned members of the RSE as well as of fellow ALLEA members the British Academy and the Royal Society (London) were also represented. The reception was followed by a festive dinner attended by the ALLEA Board Members and partners as well as RSE Senior Office Bearers.

The second day of the meeting was mainly devoted to discussing ALLEA’s numerous activities in the area of science policy. Significant portions were dedicated to the developments regarding SAM as well as upcoming events and initiatives in cooperation with the European Parliament. The meeting concluded with looking ahead to the next ALLEA Board Meeting, which will take place in September in Bern, Switzerland. The ALLEA Board members and guests completed their visit to Edinburgh with a conducted tour of Historic Edinburgh by Dr Iain Gordon Brown, FRSE. Finally, ALLEA Vice Presidents Daniela Ježová and Ed Noort represented ALLEA at the annual RSE Fellows’ Summer Reception which took place that evening.

The Royal Society of Edinburgh is Scotland’s national academy. Founded in 1783, its Fellowship includes some of the best intellectual talent in academia, the professions and business. It facilitates public debate, research programmes, educational projects and strategy formulation. Its strength is its diversity and impartiality. The Society’s unique multi-disciplinary approach enables it to draw from and link with a broad spectrum of expertise to advance the understanding of globally-important issues. In fulfilling its Royal Charter for the ‘advancement of learning and useful knowledge’, the RSE is seeking to contribute to the social, cultural and economic wellbeing of Scotland.