You are here: Home1 / Paweł Rowiński 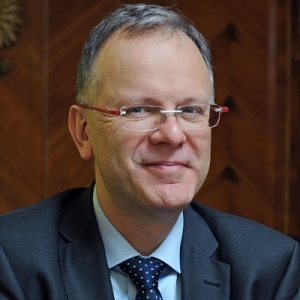 Paweł Rowiński holds a degree in mathematics by the University of Warsaw, and doctoral and habilitation degrees in earth sciences with a specialisation in geophysics by the Institute of Geophysics, Polish Academy of Sciences. Among others, his research interests include mathematical methods in geophysics, geophysical flows, river hydrodynamics, and fluvial hydraulics. Paweł Rowiński has published more than 160 refereed scientific publications. He serves as Associate Editor for several prominent scientific journals and publications. In 2018 he was elected the Vice Chair of the Europe Division Leadership Team of the International Association for Hydro-Environment Engineering and Research IAHR. Since May 2015, he serves as Vice-President of the Polish Academy of Sciences (second term in office)