You are here: Home1 / SAPEA Publications2 / ALLEA Statement on the Status of the Patent System of the European Uni...

This statement adds to a statement made by ALLEA on 30 June 2011 on “The Future Patent System of the European Union,” wherein ALLEA expressed the view that the creation of a European patent with unitary effect was long overdue and the possibility of creating a single European patent judicature should be further explored.

In principle, ALLEA welcomes the adoption of the Unitary Patent Regulation and the Regulation related to translation arrangements, as well as the signing of the UPC Agreement, despite the fact that the three legal instruments constitute a complex and complicated compromise, which does not meet all the expectations and whose implementation into practice will have to overcome several hurdles. 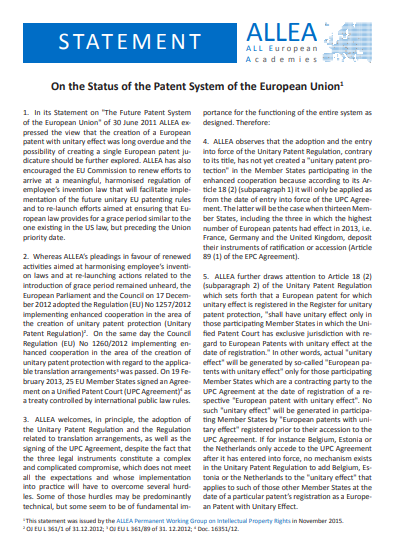 Supplementary Statement on Enhancement of Open Access to Scientific Publications...