Reflections of ALLEA on the EC Green Paper 2007

You are here: Home1 / SAPEA Publications2 / Reflections of ALLEA on the EC Green Paper 2007

Reflections of ALLEA on the EC Green Paper 2007

The debate on ERA has been intensified in 2007, especially after the EC issued its Green Paper. The European Research Area: New Perspectives (COM (2007)161). This was accompanied by a working document (SEC (2007)412/2) devoted to the present R&D situation in Europe. A preliminary analysis of the debate was published by the EC in September 2007.

ALLEA initiated a survey on the ERA and sought the opinions of its member Academies back in 2006. A synthesis of their views was set out in the February 2007 ALLEA Statement: Challenges of the Future: Reflections of ALLEA on ERA (February, 2007).

A High-level Conference on ‘The Future of Science and Technology’ was organized by the Portuguese Presidency and the EC in Lisbon, (Oct. 8-10, 2007). Commissioner, Dr. J. Potočnik stressed that this Conference should come closer to• a shared and ambitious vision for ERA;
• a strong sense of co-ownership of ERA by all concerned;
• an idea of possible broad orientations for future actions;
• a momentum to move forward and deliver.

Summing up, the message from the Conference was – Member States should act! By extension this of course means that all Academies should act. It is not only at the Conference in Lisbon that the problems of ERA have been discussed.

Many international and national R&D institutions have now analysed the “Green Paper” and formulated answers to questions raised in it. ALLEA has also asked its member Academies to formulate their views, taking into consideration both the earlier ALLEA Statement and the Green Paper. In this Statement we present a synthesis of the views expressed concerning the debate on ERA by Academies and the various relevant ALLEA meetings. 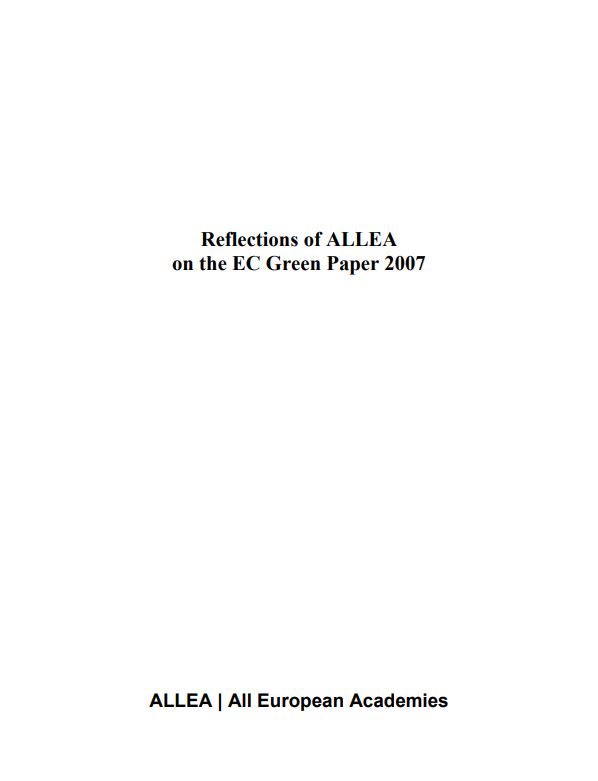 Emerging Regional Co-operation. Southeast European Academies of Sciences and...
Scroll to top
This site uses cookies to offer you a better browsing experience. To find out more on how we use cookies and how you can change your settings click on More info. AcceptDeclineMore info