What Europeans Think About Science and Technology

You are here: Home1 / What Europeans Think About Science and Technology

What are the overall attitudes of European citizens towards science & technology? How do Europeans view the role of science in their own lives and in society at large? At the ALLEA Digital Salon, we take a closer look at the latest  Eurobarometer survey on ‘European citizens’ knowledge and attitudes towards science and technology‘ to find data-driven answers to these questions.

Europeans rank science positively, but they do not feel well informed

However, while citizens have high levels of interest in science and technology, they do not feel quite so well informed: only 21% of respondents say they are very informed about environmental problems including climate change and 61% say they are moderately informed. When it comes to new medical discoveries, only 13% say they are very informed and 54% moderately well informed. Additionally, while 54% agree that they would like to learn more about scientific developments, 46% of respondents agree that science is so complicated that they do not understand much about it (28% disagree) and 33% agree that in their daily life it is not important to know about science (46% disagree).

Views on the benefits of science

Most Europeans expect a range of technologies currently under development to have a positive effect on our way of life in the next 20 years, including solar energy (92%), wind energy (87%), vaccines and combatting infectious diseases (86%), and information and communication technology (82%). Respondents also think that that health and medical care (47%) and the fight against climate change (40%) are the areas where science and technology can make the most difference. Only a minority (25%) agree that science and technology do not really benefit people like them.

Engagement with science and technology 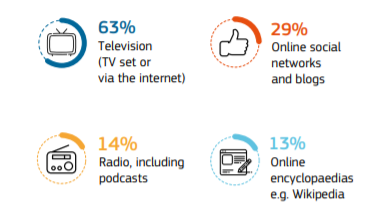 Views of scientists and their role in society

On the other hand, 50% of respondents agree that people can no longer trust scientists to tell the truth about controversial scientific and technological issues because they depend more and more on money from industry (21% disagree with this). Moreover, most respondents (51%) agree that scientists don’t spend sufficient time meeting people like them to explain their work (23% disagree).

About the Eurobarometer survey 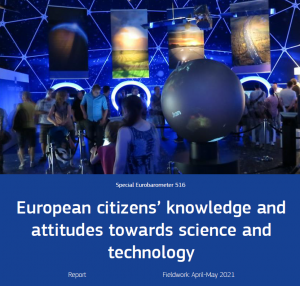 The Eurobarometer survey, commissioned by the European Commission’s Directorate-General for Research and Innovation and published on 23 September 2021, is the largest one to date on science and technology in terms of number of participants. Some 26,827 respondents in the 27 EU Member States were interviewed in their mother tongue and the data was weighted to be socio-demographically representative at country level. The survey was also conducted in 11 other countries or territories, where a total of 10,276 respondents were interviewed in their mother tongue: five candidate countries (Albania, Montenegro, North Macedonia, Serbia and Turkey), as well as Bosnia and Herzegovina, Iceland, Kosovo, Norway, Switzerland and the United Kingdom. In total, 37,103 respondents from EU and non-EU countries and territories took part in the survey, conducted between 13 April and 10 May 2021 primarily through face-to face interviews.

The engagement of citizens, local communities and civil society will be at the core of the new European Research Area to achieve greater societal impact and increased trust in science.

Genome Editing Beyond the EU: A Global Conversation
Scroll to top