The third AEMASE conference held at the Académie des sciences in Paris on 3-4 October 2017, supported by ALLEA, brought together experts, educators and policy-makers from 30 countries across both continents to elaborate strategies and actions for the improvement of science education in Africa, the Mediterranean region and Europe.

ALLEA, via its Working Group Science Education, participated in the third “African European Mediterranean Academies for Science Education” (AEMASE) conference held in Paris on 3-4 October. Participants presented and discussed a broad range of issues around the topic of inquiry-based science education (IBSE) in schools. Examples of best practise from both continents were exchanged. Delegates particularly sought to further develop and promote an initiative which seeks to implement a coordinated network of international sites called “Centres for Education to Science in Africa, the Mediterranean and Europe” (CESAME) to improve children’s scientific knowledge and intellectual tools, as well as young girls’ inclusion in science. 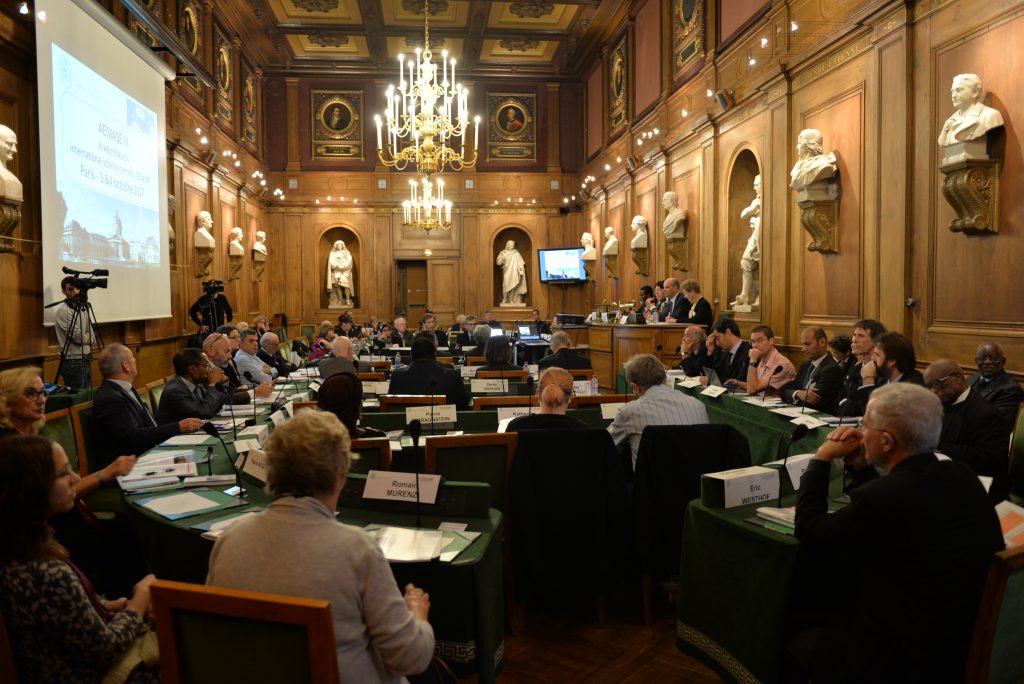 In the concluding statement, conference participants point to “the urgency to renew school science education (education in mathematics, natural science, technology and engineering) in order to help all children acquire adequate basic scientific knowledge and intellectual tools for a rational approach to situations, as well as to reach a better inclusion of young girls in science.” This commitment will be worked towards in the CESAME project. The project will initially set up at least two centres in Africa and in Europe respectively where IBSE-based curricula will be used for science education. The objective is to create a collaborative scheme in which science teachers can share experiences and learn from each other how to improve science teaching in schools. Academies and other scientific institutions from seven countries (Benin, Cameroon, Egypt, Italy, Morocco, South Africa and Tunisia) have already expressed their interest in collaborating in this initiative and potentially hosting a CESAME centre.

The conference in Paris is the third iteration of an initiative started in 2014 with the first AEMASE conference in Rome, hosted at the time by the Accademia Nazionale dei Lincei and continued in Dakar at the Académie Nationale des Sciences et Techniques du Sénégal in 2015. The project is supported by a number of international academy networks, including ALLEA, NASAC (Network of African Science Academies) and the InteracademyPartnership (IAP). [Read the AEMASE report here]

The event was opened by Jean-Michel Blanquer, Minister of National Education in France, who thanked the academies for their efforts and underlined the importance of international collaboration in the crucial area of science education.

Inquiry-Based Science Education (IBSE) is a form of science education that – unlike the traditional model where the teacher provides facts and the students learn them – gives children the opportunity to explore “hands on”, to experiment, to ask questions and to develop responses based on reasoning.

https://allea.org/wp-content/uploads/2019/04/allealogo-1-300x83.png 0 0 alleaadmin https://allea.org/wp-content/uploads/2019/04/allealogo-1-300x83.png alleaadmin2017-10-04 14:31:402019-07-31 16:17:00African and European Academies join forces to improve science teaching in schools
ENERI lays foundation for European training platform for research integrity 50th Anniversary of the Macedonian Academy of Sciences and Arts
Scroll to top
This site uses cookies to offer you a better browsing experience. To find out more on how we use cookies and how you can change your settings click on More info. AcceptDeclineMore info