Andrea Pető, Professor at the Department of Gender Studies of the Central European University in Budapest (Hungary), honoured with ALLEA Madame de Staël Prize for her outstanding scholarly contribution on Europe’s gendered memory of the Second World War, the Holocaust and political extremism. 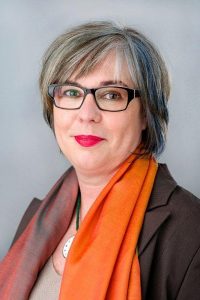 Professor Andrea Pető will be awarded the 2018 All European Academies Madame de Staël Prize for Cultural Values to honour her wide-ranging scholarly work on gender studies and European contemporary history. The Madame de Staël Prize Jury considered her research an exceptional contribution to shed light on Europe’s gendered memory of the Second World War, the Holocaust and political extremism. Pető will be the fifth scholar to be awarded the Prize, at the initiative of ALLEA, the European Federation of Academies of Sciences and Humanities, with the co-sponsorship of the Italian foundation Compagnia di San Paolo.

The 20,000 EUR Prize will be awarded on the occasion of the ALLEA General Assembly at the Bulgarian Academy of Sciences in Sofia on 16 May 2018 and will be handed over by the European Commissioner for Digital Economy and Society Mariya Gabriel.

The Prize was established to commemorate that despite variations in definition and geographical boundaries over the centuries, there has always been a deep-rooted understanding of European culture as connected by an inherent diversity supported by a dynamic and vigorous intellectualism.

Professor Günter Stock, ALLEA President and chairman of the Prize jury said: “This year the Madame de Staël Prize Jury honours not only a celebrated and prolific scholar in East and Central European contemporary history, but also underlines the intellectual originality of Pető’s approach to investigate the intricacies of remembrance in Europe’s most conflictive history from a gender perspective”.

Andrea Pető (Budapest, 1964) is Professor in the Department of Gender Studies at the Central European University in Budapest (Hungary) and a Doctor of Science of the Hungarian Academy of Sciences. Author of 5 monographs, editor of 31 volumes, as well as 261 articles and chapters in books published in seventeen languages. In 2005, she was awarded the Officer’s Cross Order of Merit of the Republic of Hungary by the President of the Hungarian Republic and the Bolyai Prize by the Hungarian Academy of Sciences in 2006.