What role do European academies play in building bridges between the production of knowledge and its diffusion to society? How can they contribute to anchoring the values of the Enlightenment upon which scientific progress is based? ALLEA celebrated its 25th anniversary addressing those key questions through a two-day commemorative and scientific programme hosted by the Swiss Academies of Arts and Sciences in Bern on 8-9 May. 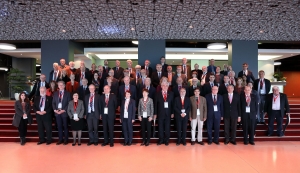 Representatives of ALLEA Member Academies after the business meeting of the 2019 ALLEA General Assembly hosted by the Swiss Academies of Arts and Sciences. Credit: Eric Schmid

The event was part of the ALLEA General Assembly, the annual meeting of European Academies that brings together representatives of more than 50 academies from over 40 countries in Europe. This year, the programme was opened at the University of Bern with a session commemorating a quarter of a century of ALLEA on 8 May.

In his speech, ALLEA President Antonio Loprieno recalled the beginnings of ALLEA by the end of the Cold War when academies across Europe joined forces to build a new platform for interaction on the European level.

“ALLEA emerged 25 years ago in the wake of profound political changes. Changes that were taking place in Europe after 1989 and after the era of partition between the East and the West. Science became more globally interconnected and international collaboration of European academies more visible and indeed necessary,” Loprieno recalled.

“25 amazing and exciting years when Europe and science changed tremendously, but also when science and Europe were challenged deeply and ALLEA was both witness and key actor of this remarkable period”, he remarked in his speech.

The celebration was dedicated to memory and remembering ALLEA’s 25 years, but also to honouring forward-looking and innovative science. After the anniversary session, the 2019 All European Academies Madame de Staël Prize was handed over by Swiss Federal Councillor Guy Parmelin to Mariana Mazzucato, Professor in Economics of Innovation and Public Value at the University College London (UCL), and Founder and Director of the UCL Institute for Innovation and Public Purpose (IIPP).

The award ceremony was introduced by the President of Compagnia di San Paolo Francesco Profumo and included a laudatory speech by Jean-Pierre Bourguignon, President of the European Research Council.

Bourguignon praised Mazzucato’s work on the relation between innovation and economic growth, as well as her focus on challenging common misconceptions on the functioning of markets and the role of the state in innovation. He also remarked that Mazzucato is considered as one of the “scariest economists” of today, as many have labelled her.

In her acceptance speech, Mazzucato expressed her gratitude and honour to be awarded a prize named after Madame de Staël, who “contested the status quo” of her time and challenged those who called themselves revolutionaries such as Napoleon.

In a similar spirit, she challenged in her speech those in the innovation, science and technology community who are defining sometimes uncritically what innovation means for the economy and society at large.

“What are markets? What are values? What is public value? We need to redefine how public and private come together and really question who is at the table”, she remarked.

“Is the market the same as the private sector? The market itself is an outcome of how public and private, and third sector, or civil society organisations, come together, but also how they are individually governed”, Mazzucato pointed out.

Science and Society in Present-day Europe

The discussions continued on 9 May in the scientific symposium ‘Science and Society in Present-day Europe’ dedicated to exploring the interaction between science and society from different angles and actors. Speakers remarked on the “enhanced role” of scientific actors in today’s digital society as Bourguignon highlighted in his keynote speech.

Madeleine Herren-Oesch, Director of the Institute for European Global Studies at the University of Basel, focused on the need to promote interdisciplinary knowledge and the role of social sciences and humanities in the building of new visions and narratives for the future of society.

The Global Young Academy analysed the potential for a (Re-)Enlightenment to bridge the gaps between society and science, and to address new challenges such as mistrust in science or digitalisation.

In the next session, Science et Cité introduced an interactive session on how big scientific breakthroughs such as the moon landing shape the public perception of science.

SAPEA, the consortium of European academy networks providing scientific advice to policy as part of the European Commission’s Scientific Advice Mechanism, concluded the debates with a panel session on the role of science advice in tackling microplastics pollution.

ALLEA participates in forum about the impact of Brexit on UK research at the...
Scroll to top