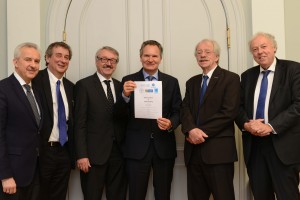 On 26 March 2015, the Presidents of five European academy organisations met in Berlin to sign a Memorandum of Understanding (MoU) to strengthen inter-academy cooperation in Europe.

The Director-General of DG Research and Innovation, Robert-Jan Smits, who attended the meeting, said: “The Commission welcomes that the European academies are joining forces to provide independent scientific expert advice for policy making in numerous fields. The Commission looks forward to continue working with the Academies on this matter in the future”.

Many of today’s societal issues are cross-cutting and therefore increasingly require the combined expertise from multiple scientific perspectives which academies are well positioned to provide. A clear and united voice of experts from across all scientific disciplines would strengthen the debates about benefits and risks of new advances and will help policy formulation and support greater public confidence. The initiative of the academies highlights the potential of independent evidence-based advice for policy-making in Europe.

Through the MoU, the five academy organisations declare their preparedness to collaborate when this brings added and timely value to their activities, assuring independence of processes and conclusions, and given that the work is supported by adequate additional funding.