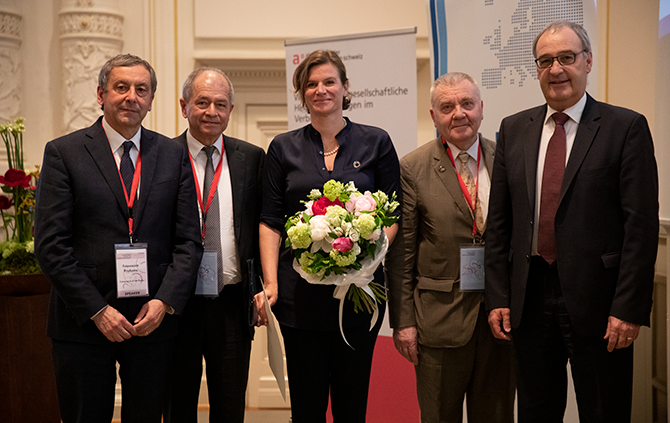 Mariana Mazzucato, Professor in the Economics of Innovation and Public Value at the University College London (UCL), honoured with the 2019 All European Academies Madame de Staël Prize for Cultural Values in Bern.

Economist Mariana Mazzucato was awarded the 2019 All European Academies Madame de Staël Prize for Cultural Values in Bern yesterday to honour her wide-ranging and stimulating work in the field of political economy and particularly her original contributions to understanding the role of the state in innovation. The Prize, endowed with €20,000, is supported by the foundation Compagnia di San Paolo.

Mazzucato is the sixth scholar to receive this prize, which was established in 2014 to commemorate a deep-rooted understanding of European culture as connected by an inherent diversity supported by a dynamic and vigorous intellectualism.

Antonio Loprieno, ALLEA President and chairman of the Prize jury, praised the distinctive career of Mazzucato. “Her scholarly work is characterised by both ingenuity and vision. With a thorough and incisive analysis, she has dug into the understanding of innovation, shedding light on the interplay between the state, business and research in our modern economy. Reminiscent of the critical mind shown by Madame de Staël, the jury honours Mazzucato as an outstanding scholar who is both helping to shape new narratives for Europe while strengthening our common values.”

The award ceremony took place on the occasion of the 25th anniversary of ALLEA, the European Federation of Academies of Sciences and Humanities, during a solemn session hosted by the Swiss Academies of Arts and Humanities at the University of Bern. Mazzucato received the prize from the hands of Swiss Federal Councillor Guy Parmelin. The ceremony was introduced by Francesco Profumo, President of the Compagnia di San Paolo, and Jean-Pierre Bourguignon, President of the European Research Council, who delivered the laudatory speech.

Call for contributions: Open Consultation on FAIR data in the Humanities
Scroll to top