Blog - Latest News
You are here: Home1 / New ALLEA Statement “On the Status of the Patent System of the European U... 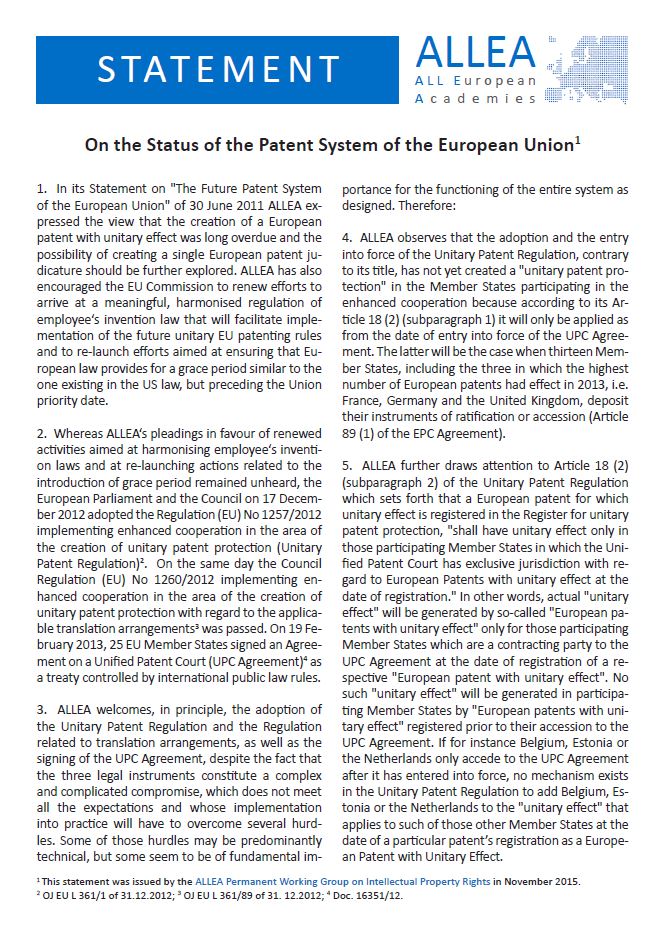 In June 2011, ALLEA via its Permanent Working Group on Intellectual Property Rights (IPR) issued a Statement on “The Future Patent System of the European Union” which supported the creation of a European patent with unitary effect and the renewal of the European Commission’s efforts to harmonise employee’s invention laws as well as provide for a grace period in order to facilitate implementation of the anticipated unitary EU patenting rules.

ALLEA’s newest statement prepared by the PWG IPR revisits these issues in light of recent developments regarding EU patent regulation on the basis of the Agreement on a Unified Patent Court (UPC Agreement) signed by 25 Member States in February 2013 as well as the 2012 Unitary Patent Regulation and the 2012 Regulation on translation arrangements. 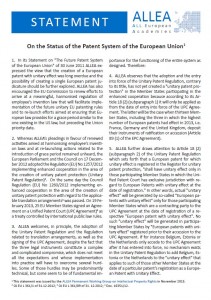 The statement welcomes the introduction of these pieces of legislation “despite the fact that the three legal instruments constitute a complex and complicated compromise, which does not meet all the expectations and whose implementation into practice will have to overcome several hurdles”. It then proceeds to assess the difficulties and deficiencies that will arise in the course of their imminent implementation. For example, the Unitary Patent Regulation and the UPC Agreement reveal a problematic situation in which the validity of “unitary effect”-holding patents is dependent on the date of their respective Member State’s accession to the UPC Agreement.

Thus, the statement offers several recommendations for resolving these issues and emphasises that the coordination of Member States’ accession to the UPC Agreement is essential for avoiding inconsistencies and confusion related to the unitary effect of patents. Moreover, ALLEA via the PWG IPR reaffirms its commitment to supporting the introduction of the aforementioned grace period, which still remains unaddressed in the existing legislation.

This statement will be addressed to the relevant European authorities and national governments in an effort to concretely contribute to the continuing development of the European patent system.

Taking stock: The Integration of Social Sciences and Humanities in Horizon ...
Scroll to top