You are here: Home1 / Permanent Working Group Science and Ethics

The PWGSE has been extending its capacities and activities during recent years, in order to adequately fulfil its mission of collective deliberation on topics such as research integrity, ethics education in science and research training, ethics of scientific policy advice, trust in science, scientific misconduct, and plagiarism, among others.

The PWGSE meets regularly and has also convened thematic meetings in wider settings, typically in partnerships with other relevant organisations such as the European Commission, the European Science Foundation (ESF), the International Council for Science (ICSU), or UNESCO, among many others. The members of the PWGSE drew on its extensive network of experts and institutions for the successful execution of the revision process.

Current and past topics

Members of the Permanent Working Group Science and Ethics

The PWGSE organised the workshop “Ethical Aspects of Open Access: A Windy Road” hosted by the Royal Flemish Academy of Belgium for Science and the Arts (KVAB) at the Academy Palace in Brussels on 1 February 2018.

Please find the workshop report presentations of the day here.

To check the concept and programme of the event, please click here.

The European Code of Conduct for Research Integrity (2017) 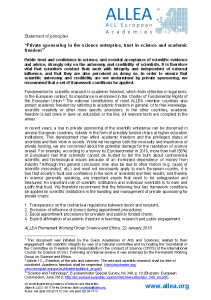 Private sponsoring in the science enterprise, trust in science and academic freedom (2015) 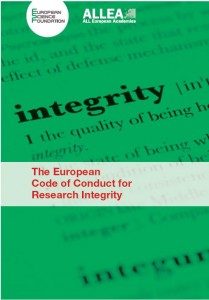 The European Code of Conduct on Research Integrity (2011) 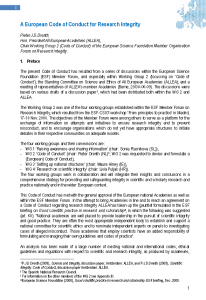 Background Paper on The European Code of Conduct on Research Integrity