In statements released between 2011 and 2013, ALLEA – via its Permanent Working Group Intellectual Property Rights – has addressed the sensitive issue of the patentability of inventions involving human embryonic pluripotent stem cells in Europe.

In this statement, taking account of recent rapid developments within the life sciences, ALLEA re-addresses the issue and renews its plea that the same moral standards which control research and development in the area of human embryonic stem cells, as well as the “production” and commercialization of human embryonic pluripotent stem cells, from whatever organism, in Europe should also control their patentability.

It is, therefore, necessary to narrow the notion of an invention to its genuine understanding, i.e. to separate it from whatever preceded and whatever follows the invention and is controlled by rules that are in compliance with competent regulations in force and prevailing principles of ethics and morals. Only such an approach can prevent human pluripotent embryonic stem cells from being ultimately equated to an “embryo”, whose definition as it stands will develop further depending on the progress of scientific knowledge. 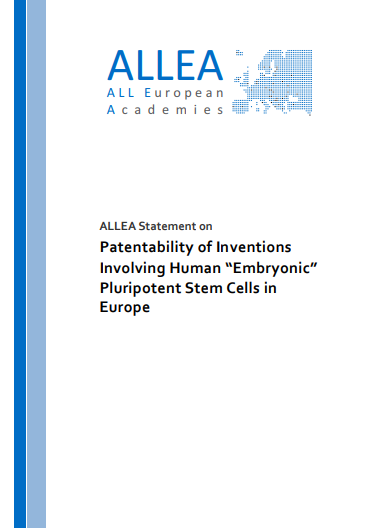 Crossing Boundaries: New approaches to science for policy in Europe

The Text and Data Mining Exception and the Enhancement of Access to Scientific...
Scroll to top