You are here: Home1 / SAPEA Publications2 / The Text and Data Mining Exception and the Enhancement of Access to Scientific...

This short statement of ALLEA invites the European Union to adopt a broad exception for text and data mining (TDM). In September 2016, the European Commission issued a proposal for a Directive on copyright in the Digital Single Market1 (“the DSM directive”). Its Article 3 provides for a mandatory exception to copyright and database right allowing for TDM.

However, the proposed exception is presently too narrowly defined, as it would not apply (i) when the results are used for publication, (ii) to independent researchers unaffiliated with research organisations, (iii) to information providers or journalists, and (iv) to private foundations or for profit entities involved in joint research projects.

Such a narrow exception will not facilitate the research of various corpora that ALLEA members are undertaking in several scientific disciplines and in various circumstances. 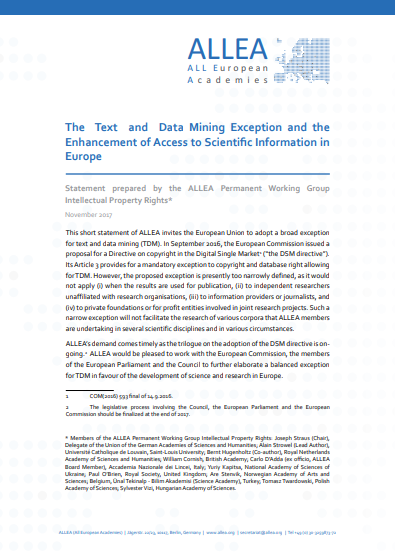 Workshop Report: Risk Perception and the Acceptability of Human Exposure to...
Scroll to top