Blog - Latest News
You are here: Home / Report from first ALLEA Board meeting in Bucharest

For the first Board Meeting of 2016, the member of the ALLEA Board convened, on the kind invitation of the Romanian Academy, in Bucharest on 29 February and 1 March. With the ALLEA General Assembly approaching fast, the Board received updates on the current status of preparations. Additionally, the Board was informed about the latest developments with the European Commission’s Scientific Advice Mechanism (SAM) and ALLEA’s role therein. 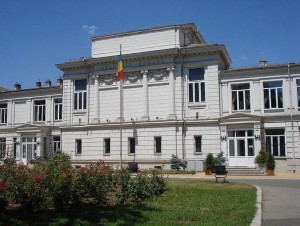 The participants were warmly welcomed to the Academy by the Academy’s President Professor Ionel Valentin Vlad. Throughout his career as a physicist, Professor Vlad has always sought to engage in international scientific cooperation and was, thus, highly appreciative of ALLEA’s visit to his Academy. To start off the meeting, ALLEA President Günter Stock informed the participants about recent ALLEA activities and the Board members received an update on the status of membership dues for the year 2015 as well as an outlook for the year 2016. Furthermore, the participantsdiscussed the progress made in the preparation of a European Commission Horizon 2020 call, in cooperation with a consortium of academy networks, to participate in SAM.

To conclude the meeting, the Board members discussed upcoming events in 2016, followed by a visit to the library of the Romanian Academy.

The Romanian Academy (Academia Românã) was founded in April 1866 as the Romanian Literary Society. The following year it began its activities, but was now called the Romanian Academic Society. In 2016, the Academy will celebrate its 150th anniversary on 4 April. On behalf of ALLEA and its member academies, ALLEA President Günter Stock will address the audience during the festivities. In 1879, by means of special legislation, it was promulgated as a national institution with the current name of Academia Românã – the Romanian Academy. Form the very beginning the newly founded institution was a national, encyclopedic and active society. It was:

ALLEA Permanent Working Group Science & Ethics met in Stockholm
Scroll to top
This site uses cookies to offer you a better browsing experience. To find out more on how we use cookies and how you can change your settings click on More info. AcceptDeclineMore info