On Saturday 6 November, ALLEA celebrated its annual Madame de Staël Prize Lecture. On this occassion, the 2021 Madame de Staël Prize laureate, Professor Helen Keller, accepted her award and delivered the lecture “Climate Change in Human Rights Courts”. The event was hosted by the Swiss Embassy in Berlin and took place in a hybrid format as part of the Berlin Science Week. 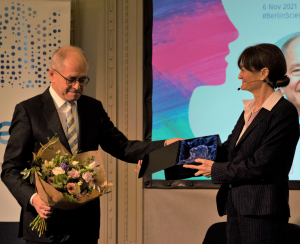 The Madame de Staël Prize Lecture is an annual scientific event hosted by ALLEA, the European Federation of Academies of Sciences and Humanities. Each year, the Madame de Staël Prize laureate delivers an interactive lecture related to their own research and reflecting on current affairs in the European political and scientific landscape. This year’s laureate, legal scholar and judge Helen Keller, delivered a lecture titled ‘Climate Change in Human Rights Courts: Overcoming Procedural Hurdles in Transboundary Environmental Cases’. Her lecture was followed by a panel discussion and Q&A session. 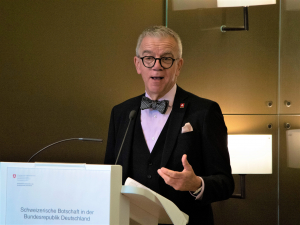 The event was opened with welcome remarks by this year’s host, Dr Paul R Seger, the Swiss Ambassador to Germany. Ambassador Seger, also an international lawyer by training, celebrated the fact that Professor Helen Keller was the first Swiss scholar to receive the Madame de Staël Prize, and commended her for her work as a legal academic, a lawyer, and as a judge at the European Court for Human Rights (ECtHR), where she served from 2011 to 2020. Ambassador Seger also emphasised that through Professor Keller, the work of the ECtHR, and indirectly, also the work of the Council of Europe were being recognised as institutions whose contributions to human rights, to the rule of law, and to European cohesion deserve to be highlighted.

This was followed by a laudatory speech delivered by ALLEA President Antonio Loprieno. Professor Loprieno highlighted Professor Helen Keller’s important contributions to the development and the consolidation of human rights jurisprudence in Europe, and for her relentless commitment to fundamental rights: 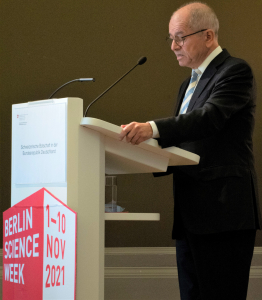 “Professor Keller stood out among a dozen other candidates because she not only excelled in the theoretical and academic field, having led research projects and held teaching positions for the past 20 years, but she also greatly contributed to Europe’s political and social life, serving at the United Nations Human Rights Committee between 2008 and 2011, at the ECtHR in Strasbourg between 2011 and 2020, and at the Constitutional Court of Bosnia and Herzegovina since December 2020.”

Professor Loprieno also stressed that the Madame de Staël Prize, named after Anne Louise Germaine de Staël-Holstein (commonly known as ‘Madame de Staël’), represents the values of inquisitiveness, European intellectualism, and individual as well as academic freedom, values that were embodied by Madame de Staël herself, who suffered the consequences of violence and political persecution in the 18th Century for the ideas she espoused and openly advocated for, but remained unshacken in her convictions. 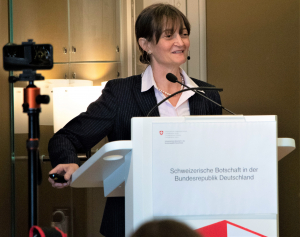 In her lecture ‘Climate Change in Human Rights Courts: Overcoming Procedural Hurdles in Transboundary Environmental Cases’, Professor Helen Keller introduced 3 procedural admissibility hurdles that can pose particular challenges for climate change cases brought before court. As Professor Keller explained, before the ECtHR can judge a case on the merits, it must check whether all the admissibility requirements have been met. More than 90% of all cases at the ECtHR fail to comply with admissibility requirements, which means the cases are declared inadmissible before they can be judged on the merits. Respecting the admissibility requirements is also important for the legitimacy of the Court, as these are the fundamental rules for the interaction between the Court and the Member States.

The first procedural hurdle Professor Keller introduced involves the demonstratation by the applicants that they have exhausted the domestic remedies; the second hurdle requires applicants to succesfully establish that they have victim status; the third hurdle requires applicants to meet their burden of proof to show that they face a significant disadvantage. For each of these hurdles, Professor Keller highlighted that there are important exceptions that have been made in previous cases, which can serve as legal precedent for future climate litigation cases.

As a conclusion, Professor Keller remarked that:

“National and international courts are being challenged in climate cases. The devil lies in the proverbial details of many admissibility requirements. For the ECtHR, this means that it has to set new standards for various admissibility requirements in the light of the climate crisis. This is possible, but the Court must handle these questions carefully so that the Strasbourg judges cannot be accused of activism, which could endanger their legitimacy.”

Professor Keller’s lecture was followed by an interactive panel discussion, moderated by Professor Başak Çalı, Professor of International Law at the Hertie School and Co-Director of the School’s Centre for Fundamental Rights. She was joined by Professor Felix Ekardt, Head of the Research Unit Sustainability and Climate Policy, and Professor of Public Law and Legal Philosophy at Rostock University; and by Dr Adam Levy, Doctor in Atmospheric Physics (University of Oxford), Science Journalist, and Climate Communicator.

The panel dug a little deeper on the 3 procedural hurdles mentioned in Professor Keller’s lecture, analysing them from a legal, but also political and climate science perspective. The floor was then opened for questions from attendees at the Swiss Embassy and for those who joined the event virtually. 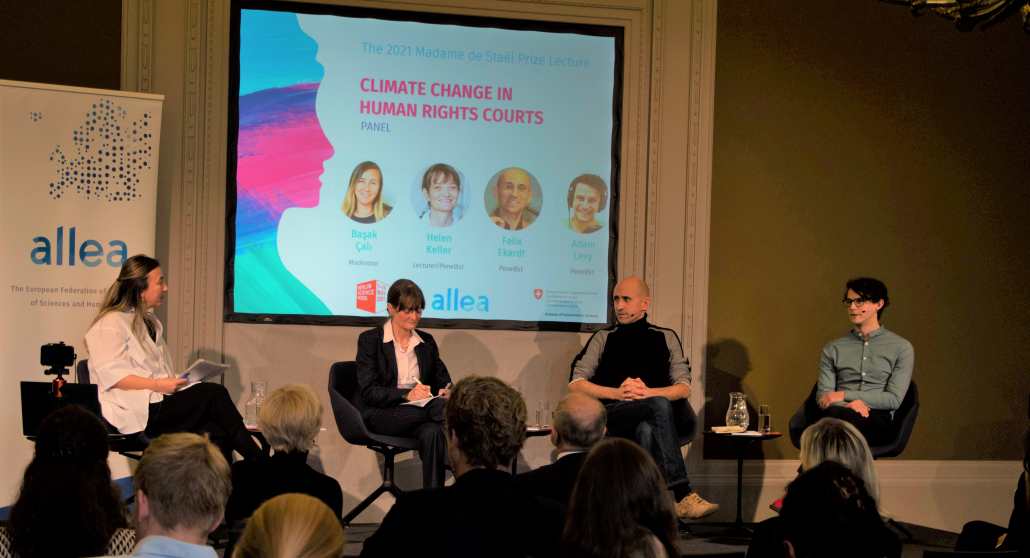 This event was hosted in a hybrid format in the context of the 2021 Berlin Science Week. You can watch the full livestream below. 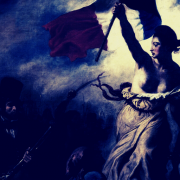