European Commissioner Mariya Gabriel awarded the Prize to Andrea Pető, Professor of the Central European University, during a festive ceremony at the Bulgarian Academy of Sciences in Sofia.

Andrea Pető, Professor at the Department of Gender Studies of the Central European University in Budapest (Hungary), received the 2018 All European Academies Madame de Staël Prize for Cultural Values today at the Bulgarian Academy of Sciences in Sofia. She was honoured for her outstanding scholarly contribution on Europe’s memory of the Second World War, the Holocaust and political extremism from a gender perspective. 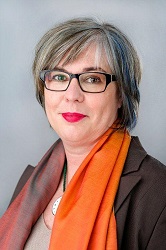 Professor Pető is the fifth scholar to be awarded the 20,000 EUR Prize, at the initiative of ALLEA, the European Federation of Academies of Sciences and Humanities, with the co-sponsorship of the Italian foundation Compagnia di San Paolo.

“Andrea Pető is a worthy recipient of this year’s Mme de Staël prize for her groundbreaking intellectual contributions in her work on women’s history in Eastern Europe. The Mme de Staël prize is unique in highlighting the importance of the social sciences and the vision of a common European identity. My congratulations to Andrea Pető for this prize and to ALLEA for choosing such an outstanding scholar”, Gabriel said.

In her acceptance speech, Pető reminded the audience to remember the “great women predecessors” in science such as Madame de Staël, who have fought for Europe`s common values. In a lecture on the parallel stories of Europe, Pető delved into the lives and struggles of Anne Louise Germaine Necker, Madame de Staël-Holstein, namesake of the ALLEA prize and a leading intellectual figure of Europe`s 19th century, as well as Júlia Rajk, the wife of László Rajk, the Hungarian Minister of Interior Affairs executed during the country’s first Stalinist show trial in 1949.

“We can all derive strength from this individual, physical joy. And we need to derive strength for our value-based fight, just like Germaine and Júlia did, because they knew that it will be a long one. There is but one thing we cannot avoid when it comes to a fight: fighting it”, she remarked.

Professor Günter Stock, ALLEA President and chairman of the Prize jury welcomed the 2018 laureate by pointing out that exploring the relationship between gender and memory is indeed a necessary activity to unsilence women in their historical context and he finished with a  cautionary reminder: Andrea Pető’s “work of unsilencing oppressed groups can only flourish when academics are free to pursue their research unimpeded by higher powers, no matter if they are governmental, economical, or indeed societal”.

The ALLEA Prize was established to commemorate that despite variations in definition and geographical boundaries over the centuries, there has always been a deep-rooted understanding of European culture as connected by an inherent diversity supported by a dynamic and vigorous intellectualism.

Andrea Pető (Budapest, 1964) is Professor in the Department of Gender Studies at the Central European University in Budapest (Hungary) and a Doctor of Science of the Hungarian Academy of Sciences. Author of 5 monographs, editor of 31 volumes, as well as 261 articles and chapters in books published in seventeen languages. In 2005, she was awarded the Officer’s Cross Order of Merit of the Republic of Hungary by the President of the Hungarian Republic and the Bolyai Prize by the Hungarian Academy of Sciences in 2006.

https://allea.org/wp-content/uploads/2019/06/DSC_0171-001.jpg 1071 1600 alleaadmin https://allea.org/wp-content/uploads/2019/04/allealogo-1-300x83.png alleaadmin2018-05-16 19:15:392019-07-24 14:51:12Andrea Pető receives the 2018 ALLEA Madame de Staël Prize
Trust in Expertise: Spectra of Science and Knowledge Production Antonio Loprieno becomes the new President of ALLEA
Scroll to top
This site uses cookies to offer you a better browsing experience. To find out more on how we use cookies and how you can change your settings click on More info. AcceptDeclineMore info