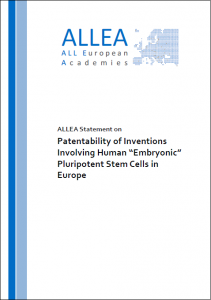 The ALLEA expert group reaffirms its previous reasoning and warns about legislative shortcomings hampering the patentability of inventions involving human “embryonic” pluripotent stem cells in light of the recent scientific progress. In 2014, the judgement of the Court of the Justice of the European Union (CJEU) in the International Stem Cell Corporation case (C-364/13) provided clarifications on the term “a human embryo” but at the same time, parts of the reasoning “could soon lead to inconsistent and contradictory results”, the ALLEA statement argues.

In this case, the Court ruled that an unfertilized human egg whose division and further development have been stimulated by parthenogenesis[i] does not constitute a ‘human embryo’ in European legislation (Article 6(2) of the Directive 98/44/EC). However, the Court argued that this interpretation only applies “if, in light of current scientific knowledge,” the unfertilized human egg stimulated by parthenogenesis does not, in itself, have “the inherent capacity of developing into a human being”.

ALLEA’s Working Group warns that, following this judgement, the developing scientific knowledge might soon provide new implications for the patentability of inventions involving human pluripotent stem cells. Particularly it indicates that a specific type of organism, parthenotes, which are derived from embryonic stem cells via parthenogenesis, currently lack the “inherent capacity of developing into a human being”. However, this feature might change in the near or distant future as a result of further research in this field. Should this be the case, parthenotes may be treated as having “the inherent capacity to develop into a human being”. As a result of this, “inventions that involve the same type of human pluripotent stem cells will not be patentable anymore”, the expert group points out. Therefore, “it appears unclear what is to be understood under the term ‘inherent capacity’”, the statement concludes.

In light of these developments and to keep up with the most recent scientific progress, ALLEA renews its plea that the same moral standards which control research and development in the area of human embryonic stem cells in Europe should also apply to the control of the patentability of inventions derived from this type of research.

“(…) it is necessary to narrow the notion of an invention to its genuine understanding, i.e. separate it from whatever preceded and whatever follows the invention and is controlled by rules that are in compliance with competent regulations in force and prevailing principles of ethics and morals. Only such an approach, as ALLEA understands the matter, can prevent human pluripotent embryonic stem cells from being in the end equated to an “embryo” whose definition as it stands will develop further depending on the progress of scientific knowledge”, the expert group affirms.

The ALLEA Permanent Working Group Intellectual Property Rights combines decades of highly specialised expertise in the European legal framework for patents or copyrights. The chair of the expert group and lead author of the publication, Joseph Straus, is Professor emeritus of Law at the Universities of Munich and Ljubljana, corresponding member of the Academy of the Lincei and the Slovenian Academy of Sciences and Arts. He was director of the Max Planck Institute for Innovation and Competition, and is one of the world’s most influential scholars in the field of Intellectual Property Rights law.

Previous ALLEA publications on the topic of stem cells research in Europe include:

[i] Parthenogenesis is “a reproductive strategy that involves development of a female (rarely a male) gamete (sex cell) without fertilization” (Encyclopaedia Britannica).