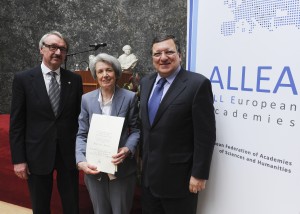 At the award ceremony in the premises of the Royal Flemish Academy of Belgium for Science and the Arts in Brussels on 9 April 2014 José Manuel Barroso, President of the European Commission, honoured the laureate´s exceptional scholarly work on European cultural values and European identity. The prize is initiated by ALLEA, the European Federation of Academies of Sciences and Humanities, and co-sponsored by Stiftung Mercator. It is endowed with 25,000 Euro.

“A sense of belonging to Europe, to a community of values and culture, is essential to forge that common destiny. Europe is us, each of us. And each of us can make a difference in Europe and contribute to driving positive change. This is what ALLEA is doing through its wide range of activities. This is also what Professor Luisa Passerini is working on, looking at what holds us together. I congratulate Professor Luisa Passerini for her exceptional work which forms part of the important scholarly contributions towards an understanding of Europe as an intellectual and cultural entity”, stated José Manuel Barroso, the President of the European Commission. Click here for the complete speech.

In his opening remarks, Professor Günter Stock, ALLEA President and chairman of the prize jury, pointed out: “It is a pleasure that today we can honour a personality who is so strongly engaged in investigating Europe´s cultures and values. At the same time she follows a critical and professional – truly scientific – approach when it comes to Eurocentrism.”

With reference to President Barroso´s initiative ‘A New Narrative for Europe’ he stated that “we as academies felt invited to contribute and to help creating new narratives. One of these symbolic – as I would call them – narratives, is the creation of the ‘Madame de Staël prize’ for European scholars working in the field of European values.”

Luisa Passerini is part-time Professor at the European University Institute, Florence, Italy, visiting Professor at Columbia University, New York, and former Professor of Cultural History at the University of Turin, Italy. She heads the ERC funded research project “Bodies Across Borders: Oral and Visual Memory in Europe and Beyond” (BABE) which aims to understand new forms of European identity. Luisa Passerini´s further research fields include History of subjectivity, including forms of European identity, Gender and generations or Diasporic subjectivities.

In his laudatory speech, Etienne François, Professor Emeritus of History in Paris and Berlin, characterised Luisa Passerini as “a historian who has proved in her scholarly works that Europe can be better understood from its margins and from the outside than from what is considered its centre.”

ALLEA has established the All European Academies Madame de Staël Prize for Cultural Values, awarded for the first time in 2014, in order to display the boundless intellectual and cultural diversity and richness of Europe and to highlight outstanding contributions of scholarly work, particularly in the fields of the humanities and social sciences.

Click here to learn more about the prize, the laureate and for further information.

See more pictures and a video of all speeches on the pages of the European Commission.