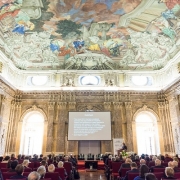 The President of Austria, Heinz Fischer, opened the scientific symposium on the freedom of scientific research

The President of Austria, Heinz Fischer, opened the 17th ALLEA General Assembly and welcomed the participants of the scientific symposium “The Freedom of Scientific Research in the Face of Political and Societal Demands” which took place at the Austrian Academy of Sciences in Vienna on 18 April 2016.
At the award ceremony in the evening, Johannes Hahn, EU Commissioner for European Neighbourhood Policy & Enlargement Negotiations, awarded the All European Academies Madame de Staël Prize for Cultural Values to French philosopher Rémi Brague.

Symposium speakers included ERC President Jean-Pierre Bourguignon, physicist Sir Peter Knight, chair of the Defence Scientific Advisory Council at the UK Ministry of Defence until 2010, as well as the former President of the Austrian Supreme Court of Justice, Professor Irmgard Griss, and former German State Minister for Culture and the Media, Professor Julian Nida-Rümelin. The symposium discussed the increasing interactions between the scientific, political and societal spheres, their risks and opportunities, from a scientific perspective and aimed to contribute to advancing the discourse about the autonomy of scientific research on the European level. 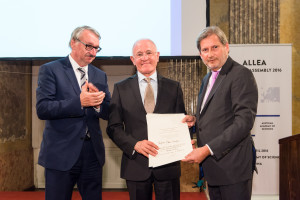 In the subsequent festive ceremony for the All European Academies Madame de Staël Prize for Cultural Values European Commissioner Johannes Hahn, former Austrian Federal Minister for Science and Research, handed over the ALLEA prize to French philosopher Rémi Brague, expressing: “The prize gives humanities a true European framework and helps establishing a distinct European cultural identity! I warmly congratulate today’s laureate Rémi Brague for his distinct contribution and ALLEA for the tireless effort of working on a better Europe.”

The laureate is professor emeritus of Arabic and medieval philosophy at the Sorbonne in Paris and holds the Romano Guardini chair of philosophy (emeritus) at the Ludwig Maximilian University in Munich. Professor Brague’s work provides an invaluable wealth of analysis on the interplay between Judaism, Christianity and Islam as they progressed through history.

“Rémi Brague uses his extensive historical, philosophical and theological expertise to study the question what makes Europe a distinct cultural entity”, stated Professor Günter Stock, ALLEA President and chairman of the prize jury, in his speech to the ceremony’s international audience at the Austrian Academy.

The All European Academies Madame de Staël Prize for Cultural Values is co-sponsored by Stiftung Mercator and endowed with 25,000 EUR. The prize is awarded to eminent scholars whose work represents a significant contribution to the cultural and intellectual values of Europe and to the idea of European integration. More information can be found here.

Business meeting 2016: delegates from more than 40 academies across Europe elect Board for 2016-18 and welcome new members

The symposium and award ceremony were followed by the annual meeting of ALLEA on 19 April 2016. In the course of the meeting, again hosted by the Austrian Academy of Sciences, the ALLEA Board was (re-) elected for the term 2016-18 and the delegates of ALLEA member academies voted in favour of admitting new members to the European Federation of Academies of Sciences and Humanities.

At the annual meeting on 19 April the member academies of ALLEA confirmed in office all re-nominated current Board members and elected three new members for the next term (2016-18). With the election, the ALLEA Board for the next two years includes members from Austria, Belgium, Bulgaria, Finland, Germany, Italy, Israel, Netherlands, Slovakia, Switzerland and the United Kingdom.

In addition to the Board elections, the ALLEA delegates voted to welcome two new full ALLEA members, the Royal Norwegian Society of Science and Letters and the Learned Society of Wales.

Delegates heard reports from the ALLEA Presidency and from chairs and representatives of ALLEA working groups. A focus of the meeting laid on ALLEA’s involvement in the European Commission’s Scientific Advice Mechanism (SAM  which was discussed in detail. Delegates presented and deliberated on topics currently addressed by their academies across Europe which could well be further elaborated at the European level as a contribution to the science policy advice which academies will provide via their European networks.

More information on the 2016 ALLEA General Assembly, including pictures of the symposium and award ceremony, can soon be found here.